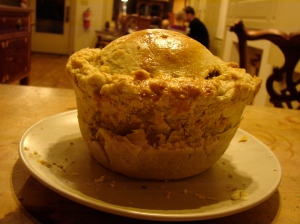 Warm a tablespoon of olive oil in a large frying pan over medium heat. Add the shallots, garlic, herbs, tomato paste, tamari, and marmite. Cook until the shallots and garlic start to brown and then add the beans. Mix well and heat through.

Put the beans in a blender, add the beer, and process until they’re roughly ground. You don’t want it too pasty.

In a bowl, add the bread and egg, and mix well.

Warm a few tablespoons of oil in a large frying pan, and add the black bean mixture. Now you’re going to cook it sort of like you’re making scrambled eggs. Let it brown on the bottom, and then scrape it up and mix that in, then let some more brown. You might need to add more olive oil as you go along. It might take about ten minutes, but you want something that’s got lots of crispy bits and looks like ground meat (I know, that’s sort of weird, but it really does taste good!)

To make the pie…

Roast two cups of cauliflower, mostly florets, cut very fine, and an apple cut in 1/3 inch dice until they’re quite brown and crispy. Stir that into your black bean mince along with about a cup of grated sharp cheddar, 2 T. of chopped golden raisins that have been soaked in water, and most of a beaten egg. Season well with salt and pepper, and add a pinch each of nutmeg, allspice, cinnamon and ginger. Put it in your pastry container, Put the lid on top, brush with egg, poke with a fork in a few places and cook at 425 for about half an hour, till it’s golden brown.

Here’s how I make guacamole…mash up a ripe avacado with one clove of roasted garlic, some lime juice, some cumin, some cayenne, lots of chopped cilantro and a chopped tomato.