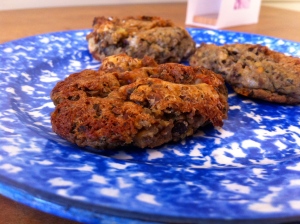 In my dream I had to answer this question on a test: What are all of Shakespeare’s plays about? And I answered without hesitation, “TIME PASSING.” And my evidence to support this answer was that all of the scenes happen in chronological order. Heh heh, yeah, showing my work, with examples. I saw the scenes, in my dream, flashing in a vivid, inevitable succession. And when I first woke up I thought, no, that’s not right, because most things are written that way, one thing and then the other as the hours and days pass. And then I thought about how Shakespeare’s plays are so passionate and immediate. How he often wrote them from stories hundreds of years before his time and how they sometimes still feel so startlingly new and real to us hundreds of years after his time. Which doesn’t feel like time passing, it feels like time standing still. And then later in the day, as I was going about my work, I thought about The Seven Stages of Man and Tomorrow and Tomorrow and Tomorrow, and thought maybe we all soliloquize about time passing in our quiet moments, but most of the day we’re too busy with the bright urgency of life to give it much thought. David showed me these beautiful films, these very ORDINARY films, made by H.Lee Waters.

They show people going about their day-to-day life, just walking down the street, mostly, or leaving work or school. The sort of in-between times when they were probably thinking about the past or the future more than about where they were at that exact minute. They’re probably thinking about time passing mostly because they’re glad that the long day is over and they’re anticipating the evening to come. The footage is beautifully relentless, streams of people in different cities leaving work and school, streams of people smiling at the camera. And the faces are so bright and beautiful, so full of life and light. So distinct, yet so strangely similar. You wonder about all the thoughts in their head. The fears and loves and worries. You wonder about their lives before and after this moment. The footage reminded me of one of the Lumiere brothers’ first films, which is one of anybody’s first films, which shows workers leaving a factory, and dogs wandering back and forth in front of them.

And these faces are also full of light, and you can just feel that the filmmakers are full of wonder at this marvelous new art that makes the mundane remarkable. And you start to think that maybe time passes very quickly for every person, with criminal speed, but it passes slowly for humankind. And now I think that everything that anybody does: artists and writers and doctors and mothers and plumbers and waiters and scientists and teachers, young & old, it’s all about time passing, in all its beautiful poignant, painful incomprehensibility. So tomorrow may be creeping forward in its petty pace, from day to day, but we’ll do what we can to make the mundane beautiful, we’ll glow with the struggle, and we’ll imagine the sun shining on our beaming faces as the days go by. 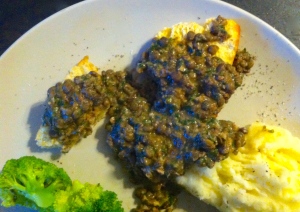 We ate this on a(nother) cold and snowy day. I wanted something warm and comforting, so I though of biscuits and gravy and mashed potatoes. This is like one of those sausage gravies, I believe, not smooth, but spicy and full of texture. We ate it over griddle scones. The next day we combined the leftover lentils and the leftover mashed potatoes, added some smoked gouda, and made croquettes. We ate these with warm tortillas, lettuce, chopped tomatoes, avocado, and some pecan tarator sauce.

In a food processor, combine the pecans and slice of bread, and whizz until finely ground. Pour this into the butter, stir and cook until the crumbs start to brown. Add the french lentils, stir and cook for a second, and then add the white ine. Stir to combine, then cook until the wine is reduced and syrupy. Add enough lentil cooking broth to make the pan quite saucy. Cook until the broth is reduced, add the spinach and cook until it’s wilted. Add as much broth as you like to make it as saucy as you lke. Add the balsamic, salt and pepper.

Preheat the oven to 425. Put the lentils and potatoes in a bowl. The lentils should have thickened up if they sat in the fridge over night, but if they’re still very saucy, you can cook them in a frying pan until they’re quite dry. Add the potatoes and stir to mix together. In a food processor combine the bread, pecans and cheeses, and whizz till coarse and crumbly. Stir this into the lentils and potatoes. Stir in the egg and season well with salt and pepper.

Lightly coat two baking sheets with olive oil. Form the batter into ping-pong-ball sized portions and drop them onto the trays, leaving a little room in case they spread out.

Bake for about 15 minutes on one side. They’ll be quite soft, so flip them very carefully onto the other side, and bake till brown and crispy.

We ate them in warm tortillas, with chopped tomatoes, avocado, lettuce, and a pecan sauce similar to this one.