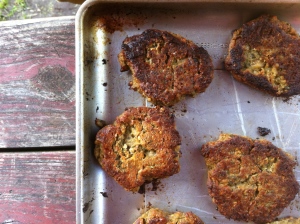 If you’re familiar with The Ordinary at all, you’ll know we’re big fans of Square America, an online collection of found photos: the kind you see in yard sales and flea markets, the kind that make you a little sad, because they’re pictures of somebody’s family and friends, and you wonder how they ended up here, in a jumble, in the hands of strangers. The pictures are intriguing, often moving, sometimes funny. You wonder what happened before, what came next. It’s a tiny moment in someone’s life, a rare glimpse. You might recall that all last year I wrote a story a week based on photos found on Square America, a habit that only died out because one of them turned into a novel, a habit I hope to pick up again as soon as I get myself organized. Last week, the proprietor of Square America posted a series of mug shots from New Castle, PA. What a strange thing to see! Probably the least private and personal of the Square America photographs, and yet you feel almost guilty looking at them, it’s really none of your business. All the same, you can’t help wondering about these people, captured in this way on a bad day, a low point in their lives, probably. You can’t help wondering what brought them here and where they went next. Well, the proprietor of Square America posted a link to Small Town Noir, a site where some very thorough person has scanned the local papers of New Castle, PA, to discover the story behind each mug shot, and then went on to research any information about the rest of their lives. [Update: That very thorough person is Diarmid Mogg, and he’s publishing  a book called Small Town Noir! Learn more about it here.] You learn what brought them here and where they went next. You learn about their parents and their lovers and their children. It’s crazy, crazy to read. I couldn’t stop reading it yesterday, and it gave me such strange dreams. People are so vulnerable when they’re alone. People need each other so much and are so cruel to one another. And people endure. So many of these people have extraordinary, awful, strange and almost unimaginable tribulations, and they live to rebuild their lives and meet new people and raise their children, and survive to a hale old age. It’s crazy to read, crazy. Eggplant croquettes! We were eating eggplant almost every day at one point in the summer. We grew it, and we got some from our CSA. So I was trying to do something new and unusual with it, and I came up with this idea. I cooked the eggplants whole until they were meltingly soft. Then I peeled them and processed them with pine nuts, bread crumbs, cheese and herbs. Then I baked them in olive oil till they were nice and crispy outside and soft and warm on the inside. These have a nice smoky flavor because of the charred eggplant, the smoked paprika, and the smoked gouda. Here’s Tom Waits with Singapore, because many of these stories could easily become a Tom Waits song. 2 smallish to medium-sized eggplants (I used a thin purple one and a squat green one) 1 slice sandwich bread, oatmeal or wheat preferred 1 egg 1 cup grated cheese–1/2 smoked gouda, 1/2 sharp cheddar 2 t rosemary 1 t fresh thyme 3 or 4 fresh sage leaves, chopped 1/2 cup pinenuts salt and lots of freshly ground black pepper Olive oil to cook. Cut the tops off the eggplants and prick them in several places. Preheat the oven to 425. Put the eggplants on a baking sheet lined in foil. Bake until the eggplants are falling apart-soft, 30 to 45 minutes, depending on their size. Drain in a colander, let cool, and peel. Put the eggplant pulp in the food processor. Add the bread, cheese, egg, pine nuts, herbs. Season well with salt and lots of pepper. Process until combined. You don’t want it to be too smooth, just broken down and well-combined. Lightly oil a baking sheet. Drop the mixture by large spoonfuls onto the sheet. Carefully turn them over so both sides are coated in oil. Bake at 425 for about fifteen to twenty minutes, till they’re puffed and browned and crispy outside. They’ll still be quite soft inside. Serve with tomato sauce or any sauce you like.