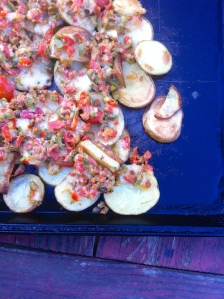 We’re having a sleepy sort of day here at The Ordinary. It’s drizzly and cold and Isaac is home sick from school. He’s mostly feeling better, but he’s subdued and quiet. I found him lying on his brother’s bed, feet up against the wall, playing with a Star Wars toy and singing. He’s eaten nothing all day but three pieces of toast, but this is a perfect day for toast. He had a stomach bug, and he suffered from terrible queasiness for a few days, and it’s one of those things that makes itself worse, that festers and feeds on itself: the more you worry about being sick, the more sick you feel. It’s like middle-of-the-night worries, being anxious makes you more anxious. I was talking to a fellow-insomniac about this conundrum, and he said that once, whilst going through a rough time that resulted in many sleepless nights, he developed the habit of saying, “I’m okay right now.” He would lie in bed and say, right now at this moment I’m healthy and have a warm house and my family is safe, and the thought of present security would help him to chase away anxieties about the past and the future. I love this idea. And so remarkable is the human brain and imagination that if your present is not happy or healthy or secure, you can do as Pierre Behuzov did, and dream about a different, but maybe no less real, reality, “Still less did Pierre think about himself. The harder his position became and the more terrible the future, the more independent of that position in which he found himself were the joyful and comforting thoughts, memories, and imaginings that came to him.” Funnily enough I’ve spent the day reading a book by Thomas Joseph Pettigrew called On Superstitions Connected with the History and Practice of Medicine and Surgery. The book, published in 1844 deals with medical superstitions from throughout recorded human history. And many of these involve amulets and charms that work because the patient believes they’ll work. It’s not the moss you take from the skull of a deceased thief, dry to a powder and then take like snuff that cures your headache, it’s your belief that it will. It’s not the three spiders that you hang around your neck that cure your ague, it’s your faith in their power. He talks about “sympathetical cures,” in which the doctor treats the weapon, not the wound. “If the superstitious person be wounded by any chance, he applies the salve, not to the wound, but, what is more effectual, to the weapon by which he received it. By a new kind of art, he will transplant his disease, like a scion, and graft it into what tree he pleases.” But as Pettigrew points out, when a doctor cleans a wound, and then takes the knife that caused it, wraps it cloth, confines it to a closet and tells the patient not to move until the wound heals, his method is not all that different from a doctor who cleans the wound and tells the patient not to move until it heals. Maybe he’s just transferred the worry from the wound to an unfeeling object. After all, he says, the physician and surgeon do all their services by observing the properties of the living body,”…where the living principle is so strong and active in every part that by that energy alone it regenerates any lost substance, or reunites in a more immediate way the more simple wounds.” Pettigrew talks about quacks and charlatans, and their methods of controlling a patient through their fears and worries. And he shows that in most cases it’s only the faith and hope that a patient feels–in the doctor, in the medicine–that allows them to heal. Sometimes it seems our bodies know what they need, and it’s our busy minds that get in the way, and sometimes it’s the power or our imaginations that heal us. Either way, it would seem the best cure is to build a wealth of thoughts to make us happy and alive, to turn to in times of sickness and worry, to have hope and faith not in the amulet or charm, but in the strength of our own minds and bodies.

This was easy to make and I thought it was very delicious. It’s kind of like nachos, with potatoes instead of chips. I used castelvetrano olives, but you could use any kind of olives you like. I chopped them in the food processor with some cherry tomatoes, and then mixed them with goat cheese, mozzarella and capers. I spread this over roasted potatoes, and then returned it to the oven briefly until everything was melted. Comforting but very flavorful.

Preheat the oven to 425. Coat the potatoes with olive oil and spread in a thin layer on the baking sheet. Put the garlic clove on the side. Roast until the potatoes are soft inside and crispy outside, about 35 to 40 minutes, depending on how thinly you’ve sliced them. Turn and stir them from time to time.

Meanwhile, put the olives, tomatoes, pistachios and capers in a food processor and pulse briefly until everything is chopped but not pureed. Tip into a bowl.

Combine the cheese and herbs and the roasted garlic clove, process until combined. Stir this into the tomato mixture. Spread this mixture over the cooked tomatoes, and return to the oven for another five minutes or so, until the cheese is starting to melt.

season with salt and pepper and eat!