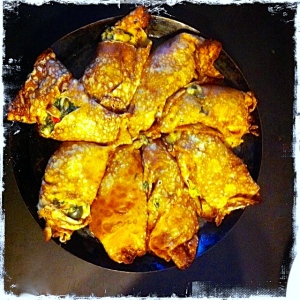 Apparently it’s National Book Day! In keeping with the situation, we’re going to have another installment of our award-winning series, Minor Characters from Major Works of Literature. I’ve been thinking a lot lately about Pierre Bezukhov. Needless to say, this is a character I love. Flawed, thoughtful, questing. I love the way his world and everything he believes is constantly falling apart around him, only to be rebuilt again. Later in the novel, after he’s captured by the French, after he’s witnessed acts of unspeakable cruelty and violence, this happens once again, “Sounds of crying and screaming came from somewhere in the distance outside, and flames were visible through the cracks of the shed, but inside it was quiet and dark. For a long time Pierre did not sleep, but lay with eyes open in the darkness, listening to the regular snoring of Platon who lay beside him, and he felt that the world that had been shattered was once more stirring in his soul with a new beauty and on new and unshakable foundations.” And this Platon, this snoring man, helps him to build a strong and lasting peace of mind upon which to rebuild his world.Platon Karataev is a peasant who has been sent to war as a punishment for stealing wood. I think he’s a beautiful character, and I’ll share a selection of my favorite quotes about him. Ready? Begin.

“He would often say the exact opposite of what he had said on a previous occasion, yet both would be right. He liked to talk and he talked well, adorning his speech with terms of endearment and with folk sayings which Pierre thought he invented himself, but the chief charm of his talk lay in the fact that the commonest events—sometimes just such as Pierre had witnessed without taking notice of them—assumed in Karataev’s a character of solemn fitness. He liked to hear the folk tales one of the soldiers used to tell of an evening (they were always the same), but most of all he liked to hear stories of real life. He would smile joyfully when listening to such stories, now and then putting in a word or asking a question to make the moral beauty of what he was told clear to himself. Karataev had no attachments, friendships, or love, as Pierre understood them, but loved and lived affectionately with everything life brought him in contact with, particularly with man—not any particular man, but those with whom he happened to be. He loved his dog, his comrades, the French, and Pierre who was his neighbor…”

“Sometimes Pierre, struck by the meaning of his words, would ask him to repeat them, but Platon could never recall what he had said a moment before, just as he never could repeat to Pierre the words of his favorite song: native and birch tree and my heart is sick occurred in it, but when spoken and not sung, no meaning could be got out of it. He did not, and could not, understand the meaning of words apart from their context. Every word and action of his was the manifestation of an activity unknown to him, which was his life. But his life, as he regarded it, had no meaning as a separate thing. It had meaning only as part of a whole of which he was always conscious. His words and actions flowed from him as evenly, inevitably, and spontaneously as fragrance exhales from a flower. He could not understand the value or significance of any word or deed taken separately.”

To Pierre, Platon Karataev is “an unfathomable, rounded, eternal personification of the spirit of simplicity and truth,” and he helps Pierre to find the tranquility he has been seeking for years.

“In burned and devastated Moscow Pierre experienced almost the extreme limits of privation a man can endure; but thanks to his physical strength and health, of which he had till then been unconscious, and thanks especially to the fact that the privations came so gradually that it was impossible to say when they began, he endured his position not only lightly but joyfully. And just at this time he obtained the tranquillity and ease of mind he had formerly striven in vain to reach. He had long sought in different ways that tranquillity of mind, that inner harmony which had so impressed him in the soldiers at the battle of Borodino. He had sought it in philanthropy, in Freemasonry, in the dissipations of town life, in wine, in heroic feats of self-sacrifice, and in romantic love for Natasha; he had sought it by reasoning—and all these quests and experiments had failed him. And now without thinking about it he had found that peace and inner harmony only through the horror of death, through privation, and through what he recognized in Karataev.”

Karataev helps Pierre to appreciate the taste of a simple potato, and in honor of that scene I made some potatoes simply boiled with butter, salt and pepper. But that’s not a very interesting recipe to tell you about, so Instead I’ll share the recipe of what we ate them with. For our Mardi Gras meal we had crepes stuffed with sautéed chard, castelvetrano olives, tomatoes and mozzarella and a sort of “ricotta” made from almonds, tarragon, and capers. Delicious!

Whisk together the eggs and milk, and then whisk in the dry ingredients. It should be the consistency of unwhipped heavy cream. You can do this in a food processor if you’re so inclined.

To fry…melt a pat of butter in a large frying pan over medium heat. When it’s just starting to brown, put about 1/3 – 1/2 cup of batter in, and swirl the pan around till you have a thin circle of batter. I like to use a pan that’s bigger than the crepes I’m going to make, so that I have room to flip them, and so the edges get nice and crispy. When the top of the crepe seems to have dried out, and has little holes forming in it, slide a spatula under the side and take a peek at the bottom, if it’s brown, flip the crepe. The second side only needs to cook for about 1 minute, the top will puff slightly. Remove to a plate, and fry all the other crepes in the same fashion.

Preheat the oven to 400. Wash and de-stem the chard, and chop it quite finely.

In a large frying pan over medium heat warm one tablespoon of olive oil. Add the garlic and pepper, and stir and fry for about a minute until the garlic starts to brown. Add the rosemary and chard and about a tablespoonful of water. Sautee until the chard is wilted but bright. Put the chard in a large bowl and stir in the olives and pistachios. Combine the mozzarella and tomatoes in a food processor and process for a few seconds until it’s all chopped. Stir this into the chard. In the same food processor, combine the almonds, olive oil, tarragon, capers, balsamic and egg and process until quite smooth. You can add a little milk or warm water to thin it down if it’s too thick to process, but don’t add too much or your crepes will be soggy. Stir this into the chard, and mix well. Season with salt and pepper.

Lightly oil a baking sheet. Put a heaping spoonful of filling inside each crepe and roll it up like a tube. Place seam side down on the baking sheet. Repeat until all the crepes are filled.

Bake for 15 or 20 minutes until everything is warmed through and the cheese is melted.

2 thoughts on “Crepes with chard, olives and tarragon-almond “ricotta””