Last night we went out for Indian food and we brought our restaurant-drawing book. Malcolm set us all the task of drawing clowns, so we did.

The restaurant was glowing, the food was good, the boys were happy–we all were! And all night long I had the strangest dreams. I dreamt that David and I went to the bank, and there was such a long line that everybody waiting got a chair to sit in. David went to get some food, and then the bank teller called my number, 76, like I was in a deli line. I said, “Oh, but it’s not my turn next!” And everybody explained to me that I’d won a special opportunity to partake in “Community Supported Banking.” Everybody waiting with me, surrounding me in their chairs, would be given a special rate (for what? I don’t know!) as long as we all agreed to be responsible for each other’s financial situation from that moment forward. I woke up at that point and I thought about how I’d be anxious to be responsible for other people’s financial situation because they might be dishonest or irresponsible, and then I felt bad for having such a dim view of human nature. When I fell asleep again I dreamed that we were at the ocean and Malcolm jumped in the waves even though it was winter time and icy cold. We laughed and looked around for a towel, and then a wave the size of the ocean came down upon us, and I couldn’t find Isaac and Malcolm was far away and I could see David but I couldn’t reach him. And then David woke me up and told me I’d been crying. I’ll spare you the account of my other dreams of the night, but they were many, and they were strange. We’ve determined that we often have strange dreams when we eat Indian food, I wonder if it’s true, or if it’s just a self-fulfilling superstitious belief. Winsor McCay believed that Welsh Rarebit could give you strange dreams. In 1904 he began drawing a cartoon in which each day a person would eat Welsh Rarebit and then have bizarre, sometimes frightening dreams. 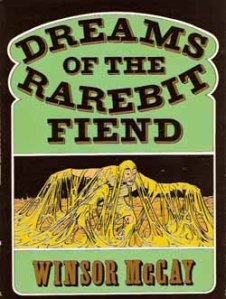 The stories became so popular that Edwin Porter made a beautiful film version in 1906.

I’ve been thinking about Winsor McCay a lot recently, because each morning when I finally shake off my dreams and clear my eyes, I see long icicles hanging from the wires outside our window, and I know that our world is covered in frost and snow and it has been for weeks and it probably will be for weeks. I wonder if instead of waking up, I’m still dreaming, and I’m in Slumberland with Little Nemo, exploring Jack Frost’s palace. 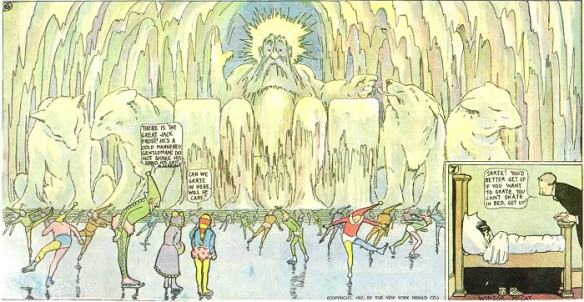 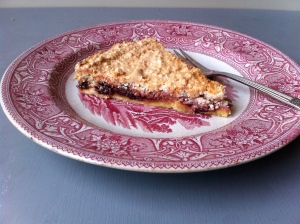 This tart is deeeeeeelicious, if I do say so myself and I do. It’s got a rich dense bottom layer, a juicy middle layer of cherry jam and bittersweet chocolate chips, and a top layer of amaretti meringue. What’s amaretti meringue, you ask? Well, it’s a meringue, and I hoped it would turn out like amaretti cookies, and it did! I’m so pleased! I’m not usually very good at making meringue, but this one turned out crisp and light, just as I hoped it would. I think if the weather was more humid we might have some problems with mushiness, but at the moment everything is wintery dry, and finally we’ve found a reason to be glad of that!

Here’s your link to the collaborative playlist of SLEEPY SONGS. Perfect accompaniment to my hibernation!

Preheat the oven to 300 and butter a large cake or tart pan.

Spread this dough into the bottom of the cake pan in an even layer pressing it down with the back of a spoon.

Spread jam over the layer of dough. You want it to be even and not too thick and gushy, so use as much as you need according to the diameter of your pan. Scatter the chocolate chips on top of the jam.

In a large bowl beat the egg whites until soft peaks form. Gradually whisk in the sugar and almond essence.

In a food processor or blender grind the almonds and flour until very fine. Fold these into the egg whites. Spread the egg whites over the cherry and chocolate.

Bake for about an hour, until the top is toasty and brown. Shut off the heat, but leave the cake in then oven until it’s cooled and the top is crispy.