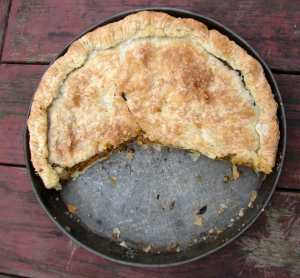 HAPPY NEW YEAR, ORDINARY FRIENDS!! I’m feeling light of heart and weighty of thoughts, which seems in keeping with the situation and the season. Clio and I took our scamper on the towpath this morning to our favorite field, where the sky arches overhead in bright clouds, and the field bows underfoot in a gentle slope to a rushing singing creek, and that’s how my spirits feel. Buoyant and grounded. Castles in the air with foundations on the ground. I’m feeling resolutionary. As I mentioned last year, to me, “resolve” doesn’t mean to give something up, but to come into focus, to become harmonious, to be solved, or healed. And this year, for some reason, I’ve been thinking about how many typical New Year’s resolutions face inward, they’re about ways to change yourself and make yourself healthier or more successful. We got a message from a fortune cookie recently that said “Only when free from projections, we can be aware of reality.” Well, I’d like to respectfully disagree with the fortune cookie. I believe it’s all projections. It’s all images and moments that we create and collect: the sunshine and shadow, the bright vivid colors and the dusky quiet times. And just as we’re the authors of our own stories, we’re the auteurs of our own film: we decide how everything is connected. We connect all the flickering moments. And I’d like mine to be inspired by Ozu and Berri and Tati. Quiet and thoughtful, humorous, beautiful within each frame and from frame to frame. Celebrating the oddness and worth of ordinary moments. With just the right music and just the right movement at exactly the right time. Of course “projection” also means casting our ideas and our stories outside of ourselves. Sharing them with others, and creating an understanding of everything else through the experiences and lives of others. Empathy. So that will be part of it all, too. We’ll focus, and then we’ll project. We’ll share a cup of kindness, a draught of good will. In the days of alchemy, “projection” described the process of throwing a stone into a crucible to create change: change from base metals to gold, originally, but eventually it described any change. “I feele that transmutation o’my blood, As I were quite become another creature, And all he speakes, it is projection.” So on this day of new beginnings we’ll think of this, too. We’ll think of focussing, reflecting, projecting, in the glowing hopeful lengthening days. Oh, and I will learn to play ukulele!

If this seems a lot like last year’s New Year’s pie, that because it is! Same butternut squash, french lentil and chard. And yet, it’s completely different. I’ve been playing around with savory nut custards, lately, and this is further evidence of that. It has more eggs, and I whizzed them with hazelnuts, almonds and pecans until they everything was quite smooth. The butternut was roasted in halves rather than small pieces, and then blended right in with the nut mixture. The chard and lentils provide a nice difference in texture, and smoked paprika and smoked paprika add a nice savory to the sweetness of nuts and squash.

French lentils prepared like this. (Start with one cup dried, and use them all when they’re cooked!) Drain them well and save the cooking broth for soup or sauce.

First make the crust. In a large bowl combine the flour, salt and pepper. Grate in the butter, mixing with a fork as you go. You should have a coarse and crumbly consistency. Mix in just enough ice water to make a workable dough. Knead very briefly to ensure that everything is incorporated, form into a flat disc, and wrap in foil. Chill in the fridge for at least half an hour.

Meanwhile…preheat the oven to 425. Cut the butternut squash in half lengthwise, scoop out the seeds, and place it face down on a small baking sheet covered in foil. Roast until it’s browned and caramelized and soft inside, 30 – 40 minutes depending on its size. Set aside to cool. Wrap up half the squash for use in another recipe, and scoop the soft flesh out of the other half.

Warm the olive oil in a large skillet over medium heat. Add the garlic, stir and fry for about a minute, add the tomato paste. Stir until you have a thick sauce. Add the roasted squash flesh. Break it up with your spoon and stir it into the mix. Add a few tablespoonfuls of water, the chard, the smoked paprika, nutmeg and rosemary. Stir to combine everything. Cover and cook for 4 or 5 minutes until the chard is wilted but still bright. Remove the lid and cook till the pan is fairly dry, a few more minutes. Set aside to cool.

In a food processor whiz the eggs until they’re light and fluffy. Add the nuts, and process again until they’re fairly well ground and you have a smoothish batter. A bit of nutty texture is fine, so don’t worry about getting it completely silky. Add the cheeses and process again. Add the chard and squash mixture, and process to combine and chop slightly. You want flecks of green, so don’t process until completely smooth. Transfer to a bowl, stir in the lentils and season well with salt and pepper.

Preheat the oven to 425 again. Break the dough into two pieces, with one being about 3/4 of the total. Butter and flour a large tart pan or cake tin. Roll the dough to fit over the pan, and press it in to the corners and up the sides, leaving a little bit extra all the way around. Don’t worry about making it a perfect circle, but be sure to cover the whole pan. Pile the filling inside the crust. Press the halved tomatoes into the filling in a circle, with one or two in the middle.

Roll out the remainder of the crust and fit it over the top. Press the edges of the top and bottom crusts together and roll them down to seal them. Press with tines of a fork to be sure that the edges are sealed. Poke the top of the pie in a few places.

Bake until puffed and dark golden brown, around 35 minutes. Let cool slightly, then slice and serve.