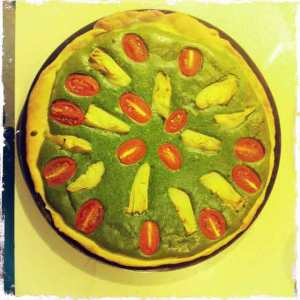 I seem to get a lot of calls and texts from people I don’t know, for people I don’t know. One woman in particular, a certain Lorraine, must have chosen my number at random to throw off the pack of people calling for her, none of them with anything nice to say. Last night I got a text from someone asking how my evening was going. It was a misdirected message, so I just ignored it, but we were thinking it would be funny if I wrote back. “Oh, you know, not so bad. I worked all day, and I’m strangely tired, even though we weren’t very busy. It’s all snowy here, it snowed most of the day. Now it’s rain upon ice upon snow upon snow upon last week’s snow. Very pretty and surreal in a glowing glittering pinkish-dawn light kind of way. I got home from work early because of the snow-slowness, but also because of the snow, the whole day felt like evening, and when I got home I just wanted to drink some wine, make dinner and go to bed, even though it was only late afternoon. I thought about times before electricity and heat. In the winter they must have shut their lives down when the sun went down. Especially if they couldn’t afford lamps or candles. I suppose I haven’t evolved much past that. Malcolm was at a guitar lesson when I left for work, and at a friend’s house when I got home. Isaac didn’t want to sleep without him, so he came down and watched Desk Set with us, and it was funny to think about him processing information about this huge ridiculous computer. Funny to think that computers have always been part of his life. One of my favorite parts of the movie is when Spencer Tracy grabs Katherine Hepburn’s hand and says, “I bet you write wonderful letters.” I bet she does! It felt strange to be waiting up for Malcolm, a sort of premonition of things to come, and a strange discombobulating reminder that my parents probably waited up for me when I was out till all hours. Of course I was older than Malcolm is now, and it was disarming to think about what Malcolm will be like when he’s older. When he came home he was all rosy and bright-eyed from the cold, and he gave me two hugs and sat with his arm around me for a few minutes, which was especially nice after I’d been confusing myself with thoughts of the future and the past. He told me he ate raspberries and whipped cream for dessert, and he knew I’d be jealous. We made the boys go to bed, but we could hear them talking, and I like to think about Malcolm telling Isaac about his day. My throat hurts, so I’ll probably drink some orange juice before bed. And that’s about it, that’s how my evening’s going.” But of course I didn’t write that, I didn’t write a long letter to a compete stranger. I just left it. I miss writing letters, although I was never very good at keeping up a correspondence. I like email for the immediacy of it, but I feel like we sometimes get lazy with it. Obviously texts and tweets are the least likely to be thoughtfully composed, but they’re still words, they’re still writing. So today’s interactive playlist is the subject of written communication: Letters, tweets, texts, writs, notes, cards, telegrams, whatever you like! 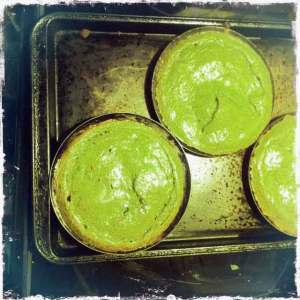 The first night, I made these little timbales, if you like, or tiny flans. I was experimenting with the idea of savory hazelnut frangipane, or hazelnuts ground into a sort of quiche mixture. It was very tasty! The next night, I decided to put it all in a crust, a yeasted crust almost like pizza dough. And I arranged some artichoke hearts and cherry tomatoes on top, for a change in texture and taste, and because it looked pretty and festive. And that’s that. I made enough dough for two small pies, and I used half of it to make a pizza for the boys, with simple red sauce and mozzarella.

Here’s your link to the interactive playlist. As ever, add the song yourself, or leave a note in the comments and I’ll add it for you.

Combine the yeast and sugar and 1/2 cup water and set aside to get bubbly, about 15 minutes. Add the olive oil, and then the flour and salt. Add enough water to make a kneadable dough. Knead for about seven minutes, until smooth and elastic. Put in a large, lightly oiled bowl and cover with a damp towel. Set aside in a warm place for about two hours. Fold it down, and let it set again for about 45 mintues.

Break into two pieces, and press into a lightly oiled tart pan or baking sheet, molding some of it up the sides to make a crust. I used one tart pan for the hazelnut tart, and one baking sheet to make a pizza for the boys (with red sauce and mozzarella)

Preheat the oven to 425. Prebake the crusts for about ten minutes, until they’re firm to the touch and no longer shiny.

Artichoke hearts, quartered. (I use canned in brine, drain them well if you do the same). A handful of cherry or grape tomatoes, halved.

In a large skillet over medium heat, warm the butter. Add the garlic and rosemary, and stir and cook until the garlic starts to brown. Add the spinach, stir and sautée until wilted. Cook until the pan is quite dry and set aside.

Pour into prebaked tart shell. Arrange the artichoke hearts and tomatoes in a pretty pattern on top.