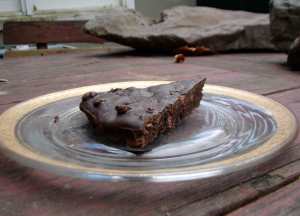 David recently bought The Blind Leading the Naked, by The Violent Femmes. What a time warp!! It’s such an evocative album, and it’s funny because it’s evocative for David, too, and it’s not like Violent Femmes’ Violent Femmes, which is probably evocative for everybody who was a teenager in America at the time. It brings back strange specific memories. I remember going for a long trip in a friend’s car, and he was obsessed with this album. I fast-forwarded through a song I didn’t feel like hearing, without asking (cassette tape!) He got really angry, because it was a thoughtless and self-centered thing to do, which, in all fairness, it was. And later he stopped being friends with me on grounds of thoughtlessness and self-centeredness, which in all fairness was probably true of me at the time, too. But mostly the album brings back pleasant memories, of adventures with friends. And it brings back memories for David of the same time and the same part of the world, but we didn’t know each other at all. But we might have crossed paths, we might have been in the same city, listening to the same song, and not even knowing it. And now Isaac likes the album, too, and he has some of the lyrics memorized with uncanny awareness and precision (we’re going to have to be very very careful what we listen to around this boy!) One song in particular, I want to listen to over and over. It’s Good Friend. It seems strangely perfect to listen to it now, to remember a time when my heart probably was in a mess every time I turned around, but to be sitting next to the best friend I’ll ever have, sharing our separate memories. I particularly like the part in the middle where he talks. The music grows hushed, you’re waiting for it, you’re ready for it. Like all talking parts in the middle of songs, you know he’s going to be sincere and serious, you know he’s going to be sincerious, and in a few lines his personality and his peculiarly stylish style shines through with such clarity. I love it. So this week’s interactive playlist is songs in which the singer talks in the middle, songs with that beautiful part where you get to the bridge and you find somebody on it, talking to you about all the things in his or her heart. Conversely, we can also have hip hop songs in which the rapper sings unexpectedly, because I love those too.

Isaac designed this cake. His birthday is coming up, and this cake was sort of the rehearsal. He wanted chocolate cake with chocolate chips and pecans. He wanted vanilla and cinnamon, and he wanted powdered sugar and brown sugar. I decided to make it in the style of a genoise, because I find that a fun cake to make, and I didn’t want it to be too much like pecan brownies. So this is dense but softish, too.

Here’s a link to the interactive playlist. This is one of those subjects I’m going to need help with. I always hear a song with a taking part and think…I’ll remember that to use in a playlist, but then I always forget when the actual time comes.

Preheat the oven to 375. Lightly butter and flour a cake pan.

In a food processor, whizz the eggs until they’re light and fluffy. Add the sugars, vanilla and rum, and continue to whizz for a few minutes. Add the butter in small pieces, and whizz until well combined and creamy.

Add the flour, cocoa, salt and cinnamon, and process until you have a completely smooth batter. Add the chocolate chips and pecans, and process very briefly, just to combine.

Pour into prepared cake pan. Bake for 25 to 30 minutes, till it springs back when lightly pressed and starts to pull away from the pan on the edges.