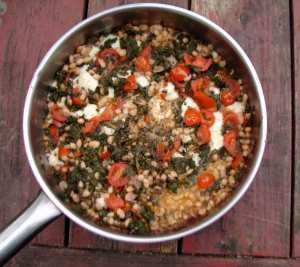 How strange it is to one day wake up and find yourself the age that you are, whatever age that may be. And find yourself living where you do, wherever that may be, and living with the people you live with, whomever they are, (and still uncertain when to use who or whom, despite your best attempts to learn). How strange to find that you still struggle with all the things you’ve ever struggled with, although some are stronger or weaker now, some are just nagging shadows of old worries, and some threaten unexpectedly to drown you, on a bad day. How strange to hope for the things you hope for, and work at the things you work at, and find that they haven’t changed all that much since you were a child, and how strange that you’re not still a child. And where did this dog come from? How did she end up here, of all places? It’s a funny discombobulation, sometimes, to look at your life from the perspective of your former or future self, and to walk around your world dizzy with the speed that everything is going. I made a joke yesterday that I’m a bon vivant who spends my days making witty quips and drinking champagne cocktails. I’m so obviously not a bon vivant. I’m not quick enough for clever witticisms, and I don’t even like champagne, it gives me a headache. (Although I do like bitters!) And yet, I do believe that I am a bon vivant, in the sense of a person living well. I think my former self, though somewhat shocked at the age that I am, would be gladdened and cheered to see where I live and whom I live with. I think she’d be satisfied with all that we have, and with all that we try to do with it. She’d be encouraged by the persistence in focus of hopes and works. And of course she’d love the dog. And I think that my present self had damn well understand all this with great alacrity, given the relentless pace of time passing, before she creates regrets for my future self! 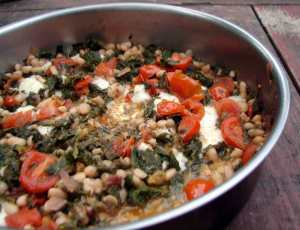 If she’s not talking about beets she’s talking about beans and greens! Sheesh. But I love beans and greens! And I particularly like them prepared this way. This is a fairly traditional treatment of kale, I think…cooked with white beans and garlic. But there are two special sneaky things that make this different. One, it has raisins in it. Just a small handful of golden raisins, chopped up, but it lends a subtle sweetness which goes nicely with the kale’s bitter edge. And two, it has a small amount of red wine, which gives it a nice rich warmth. I put small cubes of mozzarella in, which gave it a nice meltyness, and made it nice to eat with crusty bread. The boys ate it with orchiette pasta, but it would also be good with couscous, farro or bulgur, or even rice.

Here’s Once in a Lifetime, by Talking Heads

Bring a pot of salted water to boil and drop in the kale. Boil 5 – 8 minutes until it’s tender and wilted but still bright. Drain and let cool.

Add the white beans and tomatoes, and cook until the tomatoes start to soften.

When the kale is cook enough to handle, chop it quite finely, and add it to the pan, along with about 1/2 cup water. Bring to a boil, and then reduce heat and simmer until the dish is just as saucy as you like it, and the kale just as tender. Stir in the balsamic, basil, salt and pepper. Drop the cheese in and mix slightly. Turn off the burner, but let the pan sit for a while on the hot surface until the cheese just melts.

Serve over pasta, any grain you like, or just with some good crusty bread and butter.

3 thoughts on “Kale with white beans, raisins and tomatoes”