Last night we watched Au Hazard Balthazar. I found it incredibly moving and beautiful, but I need to think about it more before I talk about it, so I’ll talk instead about something that it reminded me of. Which is, of course, Zola’s Germinal, which takes place in the same part of the world about 100 years earlier. Au Hazard Balthazar is the story of a donkey, a working animal in rural France, who faces abuse and cruelty at the hands of his many masters. Germinal tells the story of a community of miners in rural France whose world is awash in casual and thoughtless cruelty, at the hands of their masters and amongst themselves. Of course this cruelty extends to the animals who live with them, who work for them, and whom they eat, it’s all part of a cycle of violence and poverty and need. And this cruelty is a source of tension and anxiety in the novel, it adds to the suspense of a situation that is becoming unbearable, which is about to violently explode. Souvarine is a young Russian revolutionary who believes the entire world needs to be razed clean with blood and violence. He cares for nothing and nobody, except for a fat rabbit that has the run of the house where he boards. And she loves him, too, she loves to sit on his lap while he gently strokes her ears. It’s a scene of real affection and peace, and it’s followed immediately by a scene in which the entire town feasts on rabbits. We worry for her, for Souvarine’s friend. Just as we worry for the finches tied sightless and motionless in cages for a singing contest at a fair, and for the horses who spend their entire lives in the pit, five hundred meters below the earth. On Etienne’s first day in the pit, he’s horrified by the hellish conditions there, and his journey back to the surface is delayed by the nightmarish scene of a horse being lowered into the pit.

Meanwhile, however, operations were proceeding in the shaft, the rapper had sounded four times, the horse was being lowered. It was always a worrying moment, for it sometimes happened that the animal was so seized with terror that it was dead by the time it arrived. At the top, trussed in a net, it struggled desperately; then, as soon as it felt the earth disappearing beneath it, it remained petrified, and as it vanished out of sight, with its great eyes staring, it didn’t move a muscle. Today, the horse was too large to fit between the guides, and, once they had strung him below the cage, they had had to bend his head round and tie it back against his flanks.
…
Soon, Trompette was laid out on the iron slabs, a motionless mass, lost in the nightmare of the dark and bottomless pit, and the long, deafening fall. They were starting to untie him when Bataille, who had been unharnessed a little earlier, came up and stretched out his neck to sniff at the new companion who had fallen from earth to meet him. The workmen formed a wide circle around them, and laughed. What was it that smelled so good? But Bataille was deaf to their mockery. He was excited by the good smell of fresh air, the forgotten scent of sunshine in the meadows. And he suddenly let out a resounding whinny, whose happy music seemed muted with a sorrowful sigh. It was a welcoming shout, and a cry of pleasure at the arrival of a sudden whiff of the past, but aslo a sigh of pity for the latest prisoner who would never be sent back alive.

There’s more about the horse’s fall into hell, and Zola continues to imagine the horses’ dreams of the pastures and sunshine of their youth. In a book as gritty and factual as Germinal, it’s a rare flight of fancy. It’s this empathy that makes you feel more moved by the plight of the humans, and gives you hope that they will learn to be kinder to each other. If you can understand the suffering of a horse, and can sympathize with the animal, you can’t be blind to the suffering of your fellow humans, you can’t have turned yourself off and resigned yourself to the cruelty of the world. You can allow yourself the euphoric pleasure of dreaming of a day when everybody is equal, and justice reigns, and “all the populations of the earth are totally transformed without a single window being broken or a drop of blood being spilled.” 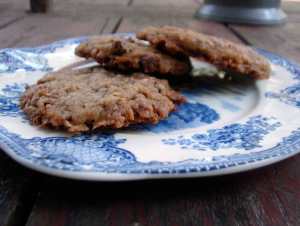 I’ve been making lots of cookies, lately, so I thought I’d tell you about two kinds at once. They’re both very easy and quick. I made them both entirely in the food processor, but if you don’t have one you could make them by hand. One is a pecan coconut chocolate chip. It’s chewy and crispy and very sweet–like a candy bar almost! But irresistibly good. The other is cormeal, almond cinnamon. It’s more of a cakey cookie, soft and dense. But it has a built-in crunch from cornmeal and finely ground almonds. I said almond and cinnamon remind me of Christmas, and David said he could eat these all the year round.

Here’s Odetta with All the Pretty Horses.

Add the pecans and chocolate chips and process briefly to combine–you don’t want to break them down completely.

Drop by teaspoonfuls onto lightly buttered baking sheets, and bake for about ten minutes. If the bottoms brown too fast, turn the heat down to 350 and move the sheets to the top shelf.

The cookies are done when they lose any soft pale patches. Remove to a cooling rack to dry. They’ll be soft at first, but will become crispy and chewy as they cool

Process the sugar, almonds, and butter in a food processor until blended and creamy. The almonds won’t be broken down completely, but that’s okay, because you want a bit of texture.

Add the egg and extracts and process again until smooth.

Add the flour, cornmeal, salt, baking powder and cinnamon and process until you have a thick smooth batter.

Drop by teaspoonfuls onto lightly buttered baking sheets. Bake for about ten minutes until the cookies are firm to the touch and golden brown. Remove to a cooling rack to cool before eating.