Yesterday I foolishly went on and on about how if you Hergéed my name it became Assez, and about how much I like the word “enough.” And I closed with a joke about how Assez would make a good graffiti tag. It was all inane nonsense and probably not worthy of one post, let alone two. And yet, I’m sorry to say, today’s post is going to be a follow up. A part two. Because I became very taken with the idea of having Assez as a graffiti tag! I developed this whole fantasy in which I had a) artistic talent b) guts and gumption c) money and freedom to travel and d) the ability to stay up past ten o’clock at night, and in which I travelled the word leaving my mark. Because “enough” doesn’t just mean an amount that is right and needful, or a sufficiency. “Enough” is also a word you yell when you’re fed up with something, when something is depressing, discouraging, or just generally wrong, and you want it to stop. (You know, when you’re watching your programs, and your children are upstairs beating each other with sticks, and you don’t want to stop them right away because you don’t want to discourage their creativity or dampen their competitive spirit, but finally, the noise is just too much and you can’t hear what the people on the TV are saying so you stomp upstairs and yell, …well, you know.) I had this vision of going to all the places in the world where people are being cruel to one another or to animals, which, let’s face it, is pretty much everywhere in the world, and sneaking in at night to write ASSEZ! “Then I’ll be all around in the dark – I’ll be ever’where—wherever you look.” I’d go everywhere that people are breeding ignorance and creating hatred and suspicion to keep some poor while they themselves become rich. I’d go wherever men are waging war for profit. I’d go to all the fast food places where people are serving pink slime burgers and cover their walls with it. (“Assez” not pink slime…) I’d go to all the places where people are making dangerously stupid television programs or reporting lies as truth, and I’d write ASSEZ!! And today I went so far as to waste a ridiculous quantity of time playing with the spraypaint app on my phone. It’s not perfect, of course, because as soon as I realized how much time I’d spent thinking about it I had to sheepishly stop.

But do you see what we have here? Tintin blue, of course, and golden tear-bubbles, and a glowy quality, and the same sort of font as my Atget book, and … I know, I know, that’s quite enough of that, Claire. Basta! Genug! ASSEZ!

So we came home from the farm with about ten pounds of tomatoes! We’ve been eating them for lunch every day with olive oil, basil, goat cheese and baguette. But of course I had to make a sauce! I made it light, quick, chunky and flavorful with capers, olives, herbs and a little hot red pepper. And then I made this cake to spoon it over. It’s almost like polenta, except that it has a lot more flavor and a more interesting (to me) texture. It’s soft and puddingy inside, and a little crispy on the edges. It was very easy to make–I mixed it in the processor and then poured it right in the pan to bake it. Even the boys liked it!! 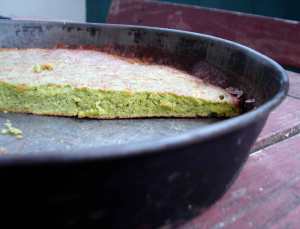 Here’s KRS One Out for Fame, about graffiti writers.

olive oil for the pan

Preheat the oven to 425 and generously coat a cake pan with olive oil.

Pour the batter into the oiled cake pan and bake until puffed, golden and crispy on the edges, 20 – 30 minutes, depending on the size of your cake pan. Allow to cool slightly and serve.

Bring a large pot of salted water to a boil. Meanwhile, cut the top off each tomato, and cut a small X in the bottom of each. Gently squeeze out some of the seeds.

In a large soup pot, warm the olive oil. Add the shallots, garlic and pepper flakes and cook for about a minute. Add the tomatoes. Stir and cook for fifteen to twenty minutes, until they’re soft and saucy. Add the fresh herbs, butter and balsamic, and stir in the olives and capers. Cook for a few more minutes to combine and warm everything. Add the salt, pepper and fresh basil and serve.