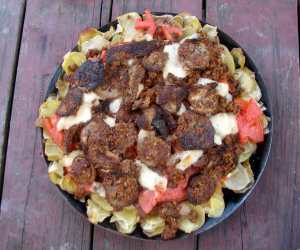 For some reason I woke up in the middle of the night with the term “bioluminescence” in my head. Maybe I was dreaming about fireflies–I don’t remember. Of course I like bioluminescence, I love fireflies and angler fish and whatever plant it is that makes miles and miles of ocean glow. Apparently animals and plants use luminescence to attract prey and mates and to signal danger; some even use it to illuminate their surroundings so that they can see better. It makes me sad that humans are trying to steal this ability…to make glowing mice or tobacco plants. This feels like something we should leave alone, one time that we should admit that other species have a sort of miraculous complexity of their own, completely different from ours. We’re not the center of everything, and we try to control it all, but we’re off to the side somewhere, messing everything up, and feeling very important and proud of ourselves. The earth is unbelievably complicated in beautiful ways that we will never understand. We have our own methods of keeping out the darkness. And if we meddle too much we run the risk of blotting out the light all around us, the luminosity that shines out of people when they’re joyful or curious, the glow that sometimes feels deadened by our frantically artificially bright world.

Here’s a list of some far more interesting words that people have dreamed, than “bioluminescence,” and they probably didn’t go on and on about it so foolishly, either! 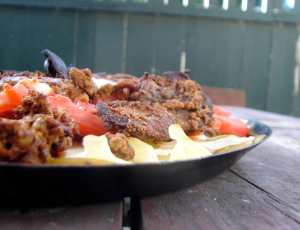 We’re getting a lot of eggplant and potatoes from the farm right now, which is fine with me, because I love eggplant and tomatoes!! In this instance, I sliced the potatoes very thin to make a sort of crust. Then I piled layers of french lentils, fresh tomatoes, mozzarella cheese and eggplant baked till crispy with a pecan crust. Very very good!

Preheat the oven to 425. Bring a large pot of salted water to a boil. Drop the potatoes in and boil for about five minutes, till soft but not falling apart. Drain completely. Lightly oil a pie plate or roasting pan. Arrange the potatoes in an even layer, to make a sort of crust. Drizzle the top with olive oil and a few dollops of butter.

Bake for ten or fifteen minutes until the potatoes just start to brown. Take from the oven and set aside.

Lentils. They should be rinsed a few times, and any little non-lentil detritus removed. Let them sizzle in the olive oil for a minute or two, stirring them to coat completely, and then add…

About 5 cups of cold water. Bring to a boil. Then reduce the heat to low, and simmer until done. Test after 15 minutes, but it might take closer to 20. You want them to be soft, but not mushy, they should still have their own shape, and almost a little crunch.

Add salt and pepper to taste. Stir it right into the broth. Strain the lentils, but keep the liquid, because it makes a delicious broth to add to soups or stews.

Warm the butter in a frying pan. Add the tomato paste and mix well, stir in the lentils. When they’re warmed through, stir in the egg. Set aside.

Olive oil for the sheets.

Peel four long slices of skin, lengthwise, and then cut the eggplant in 1/4 inch slices.

Put the slices in a shallow dish and shake some salt over them. Leave them for at least 1/2 hour, and then try to blot up the eggplant juices that the salt has brought out.

Put the olive oil and cup balsamic over the eggplant, and add the herbs. (Use more or less oil & vinegar depending on the size of your eggplant) Turn them from time to time, to be sure that every surface gets a chance to soak up the marinade. Leave for at least 1/2 hour.

Preheat the oven to 425. Put a thin layer of oil on a baking sheet.

Bake for about 1/2 hour, turning the slices every once in a while, until they are browned and crispy.

Return to the oven for about another ten minutes, until the cheese is melted and bubbly.