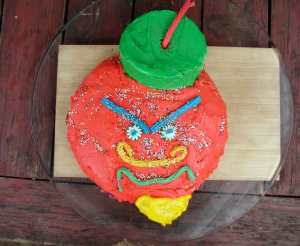 It’s Saturday, so it’s storytelling time, but it’s also Malcolm’s birthday, so I decided to write a story about one of my own photos, for a change. And then I’ll tell you about this cake, but you probably don’t need to know how I made it, because I can’t really imagine anyone else making a madman cake! 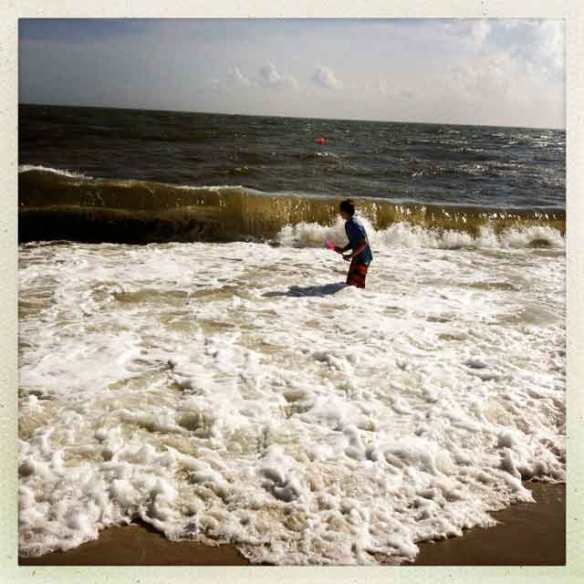 The funny thing about being pregnant is that at the beginning it’s the strangest most surreal feeling in the world, but by the end of it you can’t remember ever not being pregnant and you can’t imagine a time when you will no longer be pregnant. So that you think you’ll remember every little strangely passing moment, but you won’t, because it will all be as normal as any other day. But you might find yourself remembering some seemingly uneventful times that will become inexplicably important. And you might find yourself in a friend’s backyard drinking limeade the day before your soon-to-be-son’s soon-to-be birthday, and you won’t think much of it, but later you’ll never forget it, and you’ll never forget driving in the middle of the night through July fields with the moon so bright it looks as though they’re covered in snow, and you’ll never forget the two foxes who race away through the pale fields. And the hospital is the strangest thing yet, so that you’re sure you’ll remember every bizarre second of it, but you won’t, it will all be a blur. Time passes in some crazy rhythm so that it seems not to be passing at all, but somehow the sun comes up, and you know it’s hot outside and the world of people is busy and waking and you know what the city smells like, though you can’t smell it through thick clean glass. And you look out on these streets and think about walking them with David when you first met him, at all hours of the night, walking these streets and falling in love. And look where it got you! Well, you wouldn’t be anywhere else. And some of this is harder and more frightening than anything you’ve done before, but you’ve never felt closer to David or needed him more. And you’re desperate for some ginger ale because you’re parched, but they won’t let you have any, not even a sip. And eventually you find yourself in an operating room, and you see a pair of legs next to you and think, “Who the hell do those belong to? Because she doesn’t seem to be doing too well.” And then you realize, of course, they’re yours, these are your strange legs, and they drift back in focus on your body. And eventually everyone leaves, and you’re alone in a strange room with this small beautiful creature. He’s so new to you, because for the first time you realize he’s not a figment of your imagination, he’s not the person you’ve been dreaming up all these months, he’s a real person all to himself. You expect him to be like you and David, you look for all the ways he’s like you and David. It’s not just that he’s not like the two of you; he’s not like anyone you’ve ever met. And that’s the beginning of constant delightful bewildering frightening wonderful surprises as he becomes the person he needs to be, always connected to you but wild and unpredictable as well. And he grows and changes and you grow and change, and somehow it’s eleven years later, and he’s nearly as big as you and he’s sitting beside you on a misty July 13, in the front seat, helping you with your wallet and shopping bags, choosing a lemonade-flavored donut because he thinks you’ll like it. He’s a distinct individual, who likes good music and has a sense of humor and a sense of style and knows what he likes but still asks David if he thinks it’s cool, too. Who remembers what other people like, and saves their favorite flavors for them. Who cries when he’s been mean, which shows that he’s at least trying. And every time you see him you’re ready to burst with pride because he’s so beautiful and strong. He’s strong enough to announce that pink is a cool color, and he’s strong enough to take on the entire ocean with his glowing pink shovel. And he’s wise enough to dive into the waves when they knock him over, and to come up laughing. 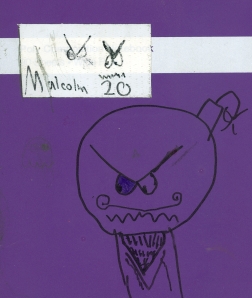 Malcolm draws this little man, called Madman. If he was a graffiti artist, this might be his tag. One day, the teacher said she needed to talk to us because Malcolm was drawing a bomb! Oh no, we said, when we realized she was talking about madman…that’s not a bomb, he’s wearing a fez! And we all had a jolly good laugh. I decided to make a madman cake, fez and all, and I was very proud that all of Malcolm’s friends said, “Hey, that’s the guy that Malcolm draws!”

Here’s July July by the Decemberists. July has never seemed so strange!