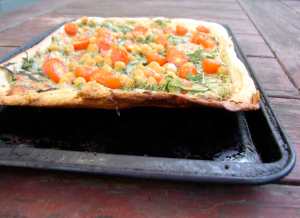 It’s the summer solstice and the first day of summer vacation. After a spring that saw hot humid days alternate with days of freezing rain, the weather is finally perfect. And I found myself in the worst mood. Cranky, anxious, discouraged. I couldn’t tell you why. Well, I could, but then I’d have to think about why, and that won’t do no one no good. I always feel horrible when I’m dejected and sweary around the boys, it feels almost abusive. And some part of me begrudged the time I have alone when they’re in school, when I can be as indulgently miserable as I want. But not today, today it was not okay, I could feel that in the way the boys kept giving me little sidelong glances and gentle pats on the back. And now I’m going to share the saga of my changing mood. This morning I went for a scamper with Clio, and when came to the end of our journey we found a dead tree bathed in golden light, stretching upward with branches like the rungs of a ladder. Each branch held small swallows, making grumpy buzzing noises. When bigger swallows flew above them, they flew up and kissed in mid-air and then then swooped away, as in some mad beautiful dance. And then I was in a foolish rush to get things done, but I was arrested by the sight of a sleek grey dog lying in the sunshine outside the door, golden and blinking, and Malcolm stopped in his backyard racing to cry, “Mom, look!” Black currants! Our bright bramble of currants is laden with fruit. I had so much to do, so much to get done, and I just stopped and picked black currants with the boys, deep in their odd acrid fragrance, trying to convince myself that this was the most important thing to be doing right now. Then Malcolm had a crazy idea of how to cook the currants, and we worked on that, but I was still in a state and cursed like a madwoman in front of the boys when the semolina flour fell out of the cupboard into our batter. (Why right in there? Why?) And then we went up to David’s shop to build boats to take to the creek. David’s shop is like an inspiring museum of craft and creativity housed in a small post-apocalyptic compound, surrounded by miles of beautiful countryside. The man that rents him space also rents out construction equipment, and you’ll find oddly beautiful piles of giant rusted metal rings that you could walk into, and drill bits the size of cars. In the back of David’s shop, a door opens onto a long corridor where barn swallows nest. If you stand in the doorway, they’ll fly around your head in dizzying loops, with humbling speed and agility, and it’s so beautiful that you want to make a film of it, but you can’t, you can’t capture it, just like Isaac will never catch a swallow in his hands, even if he calls to them in his high bright voice that is strangely like their call. And when I went back into the shop, Isaac leapt onto my back like a little monkey, and he said, in his way of talking that makes everything sound like a poem

Do you remember
When we went to the park
And you held my hands
And spun me around
And it felt like flying?

And they made clever boats and now we’re going to the creek, and I will sit on a rock and watch them, and do absolutely nothing, and try to recognize the momentousness of the situation. 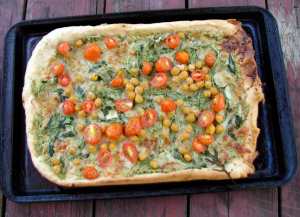 Pizza with tarragon-pumpkinseed pesto and chickpeas

I like to make pizza in the summertime. Well, I always like to make pizza, but in the summertime it’s fun to play around with different pesto sauces with which to top it, and to think of ways to add vegetables. So this time I made a pesto of pumpkinseeds, capers, arugula and tarragon. All very strong flavors. The pesto was delicious and unusual, with a slight edge of bitterness from the arugula, but in a pleasant way. Because the pesto was so strong and bright, I added chickpeas, because they’re simple and comforting. Not bland at all, but not overwhelming. The crust is thin and crispy, as ever.

Here’s The Ink Spots with When the Swallows Come Back to Capistrano.

In a large bowl combine the flour, herbs, and salt. Make a well in the center and add the yeast mixture and the olive oil. Stir well, and add enough warm water to form a soft dough. You want it to be as wet as it can that you can still comfortably knead it. Knead for about 5 minutes until soft and elastic. Put about 1 tablespoon of olive oil in a large bowl. Roll the dough in this so that it’s evenly coated. Cover the bowl with a damp cloth and set aside for two to five hours, till it’s doubled in size.

1 cup pumpkin seeds, lightly toasted in a dry pan till fragrant
2 clove garlic, roasted or toasted (in the toaster oven, you can leave the skin on, but be sure to pierce it so it doesn’t explode.)
2 T fresh tarragon leaves
1 cups arugula or baby spinach, washed
1/4 cup olive oil
2 t lemon
3 t capers
salt
freshly ground pepper
1/2 cup water

Remove from the oven. Spread the pesto evenly over each crust in a thin layer, then scatter the cheese over. Top with chickpeas, handfuls of arugula, and tomatoes.

5 thoughts on “Pizza with pumpkinseed-tarragon pesto, chickpeas and arugula”