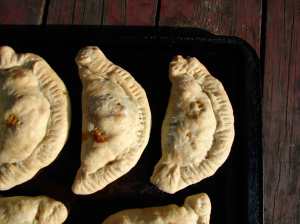 Hey, kids! It’s Saturday storytelling time! As I’m sure you recall, this means that along with your daily recipe and song, you’ll get a story, too! Each week, everybody in our small salon of auteurs (well, generally me and one or two other people) writes a story based on a found photograph. Why is this man sleeping on the floor? Where is he, and what has he been up to? If you’d like to write a story about it, and I hope you do, send me a copy and I’ll post it here, or send me a link if you have somewhere of your own to post it. 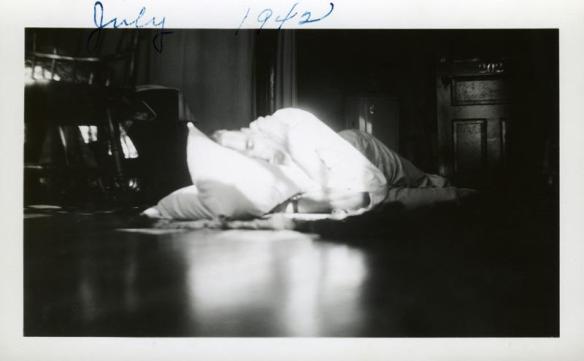 My friend asked me to make something with spelt flour, and this is what I came up with. They’re not gluten free, but they’re easier to digest for people that have a gluten intolerance. And spelt flour is a pleasure to work with!! These would work easily as well with regular flour. I thought they were nice–fresh and comforting. Perfect for this slow spring we’ve been entertaining.

Here’s Mississippi John Hurt with Make me a Pallet on Your Floor.

Combine the flour, salt and pepper. Grate in the frozen butter, mixing with a fork as you go along. Mix till you have a coarse, crumbly consistency. Add enough ice water to pull everything together into a workable dough. Knead for about a minute to make sure everything is combined. Wrap in foil and chill in the fridge for at least half an hour.

Tip all the veg into a big bowl. Stir in the beans and capers and lemon juice. Mix in the cheddar, and season well with a little salt and a lot of pepper.

Preheat the oven to 425. Lightly butter two baking sheets. Break the dough into ten balls. Roll one out to be about 1/8th inch thick. Put a big spoonful of filling slightly off center (it should be about as big as the original ball of dough that you rolled out.) Fold the dough in half, and fold up and seal the edges. Place on the baking sheet and crimp the edges with a fork. Repeat with the rest of the dough/filling.

Bake 25 to 30 minutes, until the pies are lightly golden and firm to the touch.