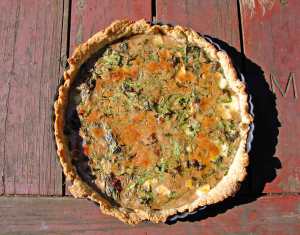 If you’re following along at home, you’ll remember that yesterday I very nearly told you the secrets of the universe. I very nearly had it all figured out. But then housework got in the way. It’s hard to ponder the meaning of life while you’re trying to remember not to forget to buy all the boring non-food items in the grocery store. Especially if you’re feeling slightly saddened to realize that the edgy alternative music of your teenage years is now supermarket soundtrack material. Sigh. I haven’t quite collected myself to return to the BIG QUESTIONS, but I have found myself pondering this medium-sized question. I’ve been wondering if the reason that we have so many great men explaining the inner workings of the human soul and mind is that the great women were off cleaning their houses and raising their children (or managing the people they hired to do those tasks). As any mother will tell you, it’s hard to complete a sentence, let alone a major work of philosophical importance, when you have a child bopping around you saying, “Mom, guess what? That’s what!!” and dissolving into giggles and then doing it again. And again. It’s hard to remember all the brilliant thoughts you might have had, when you can’t sit still and write them down until you’ve mopped a few floors and scrubbed a few toilets. It’s hard to look sufficiently erudite in your author photograph when you can’t grow a flowing white beard. For centuries, women haven’t had a voice, because their thoughts weren’t deemed worth hearing. It’s hard to fight against that sort of prejudice and shout, “This is what I know to be true,” when you’re tired out from all your chores and your children won’t eat or sleep the way they’re supposed to. It’s hard to think beyond the tangled present, the cluttered day-to-day. Which I think is a shame, because I think it’s impossible to really figure anything out, if you haven’t spent some time struggling through the humbling sameness of our days. It’s hard to understand how humanity works if you haven’t spent some time raising or cleaning up after humans. It’s hard to understand our place in the world if you shut yourself off from everything real in that world. Obviously, having children and being around children changes your perception of everything forever. It opens doors inside of you, and gives you a glimpse into the pure heart of our place in the universe. It gives you a real feeling of being an animal, full of elemental needs and wants, but it also teaches you about the transcendent quality of love, which connects you to everything else on some indefinable spiritual level. (I’m sorry if this sounds cheesy, but I swear it’s true.) The jobs that are traditionally considered “women’s jobs,”–teaching, nursing, nannying–are not only arguably the most important jobs, they are also the jobs that give you the clearest insight into all of the complicated ways that our minds and bodies grow and work. It’s all very fine to lock yourself in your study and collect your serious thoughts and your beautiful words, but don’t forget the messy, teeming life outside that door. Don’t forget the children screaming at each other in the kitchen, because they understand a lot of things you’ve forgotten. Don’t forget the world outside your window that’s slowly and inevitably rolling and growing and dying and growing and dying and growing again, whether we understand it or not. 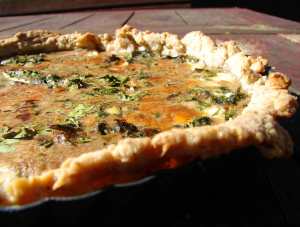 I’ve been craving arugula and balsamic salads lately! Something about the slightly bitter nuttiness with the slightly bitter sweetness is just such a perfect combination. So I decided to combine them in a tart, because that’s what I do. I added a crunchy walnut crust. I reduced the balsamic and mixed it right in with the custard. I added some sharp cheddar and small cubes of mozzarella. And I added some caramelized onions I made last summer and froze. If you don’t have caramelized onions on hand, and don’t have time to make them, you could always mince up a shallot and cook it with the garlic, if you liked.

Here’s Buddy Holly with I’m Changing All Those Changes, because it just came on as I’m typing, and I like it, and I can’t think of a song about female philosophers or arugula tarts.

Combine the walnuts, flour, salt and pepper in a large bowl. Grate in the frozen butter, mixing with a fork as you go along. When you have a consistency of coarse crumbs, add enough ice water to make a workable dough – about 1/2 cup but start with less. Knead for about a minute till everything is well-combined, wrap in foil, and set aside to chill in the fridge for at least 1/2 hour.

Warm the balsamic over medium heat in a small saucepan till it’s reduced by about half. Fifteen or twenty minutes should do it. Remove from heat. Stir in the sugar to dissolve, and leave to cool.

Preheat the oven to 425. Lightly butter and flour a tart pan. Roll the crust to be just larger than the pan, and press it in. It doesn’t need to be completely even. Pre-bake for about ten minutes till it loses it’s shine. If the edges fall, carefully build them back up with your fingers or a spoon. (Don’t burn yourself!!!)

In a large skillet over medium heat, warm the olive oil. Add the garlic and herbs. When the garlic starts to brown, add the arugula. Cook till wilted but still bright, a few minutes. When the pan is quite dry, remove from the heat. Stir in the caramelized onions. Spread this mixture evenly over the pre-baked crust. Sprinkle the cubes of mozzarella over the greens.

In a blender or food processor combine the eggs and milk. Add the balsamic syrup, and process till smooth. Process the cheddar. Pour this mixture over the greens and mozzarella.

Cook for 35 – 40 minutes, until the top is puffed and golden and firm to the touch.

Let cool for a few minutes before slicing.

1 thought on “Arugula and balsamic tart with a walnut crust”