One of the great pleasures of doing the same thing every day is watching for the small changes. This is never more true than in springtime, when the small changes are so glowing and growing and hopeful. We’ve been taking walks after dinner, which is one of my favorite things to do when the days start to stay lighter later. No matter how tired or full I am, or how much my feet and back hurt, I always want to go for a walk after dinner. Clio can be relied upon as a companion, Malcolm is almost always game, David comes if he has time, and Isaac needs to be persuaded, almost every time. We’re lucky to live along a canal with a beautiful towpath, and we’re even luckier that between that canal and the river is an old abandoned train track. It’s got a quiet, secret feeling about it, but it’s a shared secret: you won’t be overrun by people, but you’re likely to meet somebody you know. Last summer, Malcolm and I discovered a beautiful network of paths that wind from the train tracks to the river, through a low woodsy stretch of land crisscrossed by creeks. This is where we go. It’s a beautifully dreamlike landscape, and if you run through it trying to keep up with Malcolm and Clio, it can feel ecstatically like flying. After the storm in the fall, it was difficult to walk here. Fallen trees and debris and networks of crazed brambles changed the course of the path forever. Even now, in spring, everything is coated with a hoary grey vine, dried, dead, and wintery, but still clinging thickly to everything in its path. It’s a solidification of the damage that the storm did…a creeping tangling spirit of everything that got washed up and unrooted and washed under. 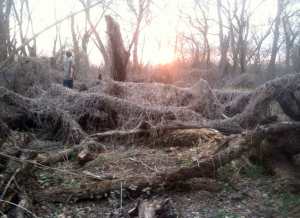 Lately beautiful small yellow flowers are taking over the landscape. In the dusky light, they glow like grounded stars, more and more every day. They’re tiny compared to the strangling vine, but they’re alive and growing, and the vine is slowly turning to dust. Each day we see more green, more gold, more leaves and flowers, we hear more birds, and watch as the creeks rise and fall with the spring rains.

The other night it was just Malcolm and Clio and me. A storm was predicted, and I’m predictably terrified of thunderstorms. I thought we wouldn’t go very far, I said we wouldn’t go very far, but I didn’t want to go back once we’d started out, and we followed almost to the end of the winding path. We walked back to a gathering of dark clouds over the river, and the rumble of thunder. I grabbed Malcolm’s arm. He shone his bright face at me and said, “Don’t worry, mom, it’s a sign of spring.” We tumbled into the house, laughing, as the real rain started to fall.

I think this strawberry tart is one of the best things I’ve made in a long time! And I’ve made a lot of good things!! I’m so proud of the stupid balsamic caramel. I feel as though I may have invented it, and I’m scared to google it and see how many millions of examples of balsamic caramel exist. So…we have a sweetened pastry crust shell, peppered with black pepper. We have a soft almond frangipane layer, topped with thinly-slice fresh strawberries. These are coated with an unbelievably delicious sweet-tart balsamic vanilla caramel glaze that’s perfect with the strawberries and the creamy frangipane. I’m patting myself on the back as I think about it!!

Combine the flour, salt, black pepper and powdered sugar in a big bowl. Grate in the butter and mix with a fork until you have a coarse, crumbly texture. Add just enough ice water to pull the whole thing into a workable dough. (Should be less than half a cup) Knead for under a minute, wrap in foil, and chill in the fridge for at least half an hour.

Combine everything in a food processor or blender, and blend until completely smooth and creamy. It might look a bit curdled at this point, but it will come together when you bake it.

Whisk everything together in a medium-sized skillet over medium heat. Stir to dissolve the sugar, and then let the mixture come to a gentle boil. Let it boil, gently, for a minute or two. Drop a little piece into ice water, if it spreads out but sets, it’s ready.

Lightly butter and flour an 11 inch tart pan. Roll the pastry to fit into the pan, and press it in, making the edges as tidy as you like them.

Bake the tart shell for about ten minutes, till it seems a fairly well set and it’s lost its shine. If the edges fall, carefully push them up again, but don’t get burnt!

Pour the frangipane into the tart shell. Bake for about ten minutes, till it’s set but soft, and has little golden spots on top.

Return the tart to the oven for about five minute. The glaze should soften and spread, and the strawberries should just become soft and fragrant. Remove from the oven and with a spoon or knife, carefully coax the glaze into any patch of tart that hasn’t been covered.

Chill in the fridge until the glaze is set.

Serve with lightly whipped cream slightly sweetened and flavored with a bit of vanilla extract.