I’m reading Roderick Hudson at the moment. It’s Henry James’ “first serious attempt at a full-length novel,” and it’s quite fascinating. It’s youthful and ambitious, and about youth and ambition, which seems so sweetly unselfconscious to me. James tells the story of two young men–an irresponsible genius and his more mature but less interesting patron. These men are like lovers, almost, and they’re like two sides of the same person (James?). And they’re like the two styles of writing that seem to be battling it out in the novel. The impetuous, romantic and credulity-straining meets head-on with the dense and methodical, and this seems to make the characters unintentionally more human and appealing. But I hadn’t planned to go on and on about the novel! I planned to talk about this one sentence that struck me as very interesting, and here it is…”At times when he saw how the young sculptor’s day passed in a single sustained pulsation, while his own was broken into a dozen conscious devices for disposing of the hours, and intermingled with sighs, half-surpressed, some of them, for conscience’ sake, over what he failed of in action and missed in possession–he felt a pang of something akin to envy.” Isn’t that beautiful? Isn’t that James? I’m fascinated by the way that time passes differently for different people, or at different times in your life. When I was younger the days seemed very long sometimes, and I remember wishing time away, and trying to fill up the hours, trying consciously to dispose of them, as Rowland does. And I recognize his gentle sense of regret and self-reproach. How could he get so little done and miss so many chances when time moves so slowly? I understand perfectly why he admires and envies Roderick, who doesn’t think about the past or the future or the consequences of his actions, who took the risks Rowland was scared to, not because he particularly wanted to or cared about the results, but because…why not? I’ve never been like that. I’ve never lost track of whole days or forgotten the time, I’ve never been brave or impetuous, I’ve never been able to free my mind of regrets about the past or worries over the future. Time doesn’t travel fluidly for me. But it does go more and more quickly, which is frightening, and makes me rue all of the hours I wished away when I was younger. I never really have anything that needs to be done, and yet I feel as though there aren’t enough hours in the day to do it all, to do everything I want to do. My days will never pass in a single sustained pulsation, I don’t think, but I have this odd image of myself swallowing them in chunks, hungrily eating them one piece at a time, and then looking back with surprise and some sadness when they’re all gone, wondering where they’ve gotten to. Obviously, the thing to do is to make them delicious, to make every hour of each day as tasty as possible, and then to try to savor them, to take my time, rather than wishing it away. 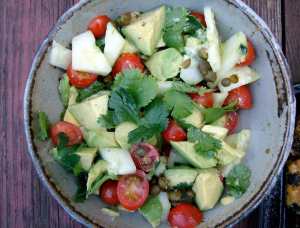 These little cakes were confounding to my boys. They didn’t think they’d like them, so they didn’t enjoy their first half-hearted nibble. But after some drama and persuasion, they both decided they liked them and ate almost all of them. David and I liked them. They were crunchy out, soft in, with a nice balance of earthy flavors. They were a bit dry, though, as baked goods made with cornmeal alone tend to be, so eat them with a sauce. This little salad or salsa was lovely! I don’t know why I’d never thought of mixing avocado and cucumber before, but they’re really perfect together! Fresh and green and soft and crisp. I kept the seasoning simple – salt, pepper, lime and cilantro, which made the whole thing bright and clean, and just the perfect accompaniment to the cornmeal cakes.

Here’s Wildwood Flower by the Carter Family, because they say “Yes, he taught me to love him and call me his flower That was blooming to cheer him through life’s dreary hour.” No dreary hours!! We’ll have no dreary hours!!

Preheat the oven to 425 and generously spread a baking sheet with olive oil.

Bring a pot of salted water to a boil, and cook the kale 8 – 10 minutes, until quite soft but still bright. Drain. When cool enough to handle, squeeze out most of the water, and chop well.

Meanwhile, warm the olive oil in a large skillet over medium heat. Add the garlic, oregeno, sage, and pepper flakes and cook for about a minute, till the garlic starts to brown. Add the beans and cook, stirring frequently, until the pan is quite dry. Set aside.

In a large bowl combine the cornmeal, salt, bp, bs, black pepper and cumin, and mix well. Stir in the eggs, one at a time. You’ll have a dense, unstirrable mixture! Add the beer, and beat well until you have a light, smooth batter. It will still be quite thick. Stir in the kale, beans, cheese and cilantro and mix well. You might need to mix with your hands at this point.

Make the batter into 8 patties and place them on the oiled sheet. Turn each over so they get oiled on both sides, and press down lightly with a spatula.

Bake twenty to twenty-five minutes until golden and puffed. Serve with avocado cucumber salsa (below) or a simple spicy tomato sauce, or any kind of sauce you like.

1 small cucumber partially or completely peeled, cut in quarters lengthwise, and then into 1/2 inch slices (or however you like it cut!)
1 avocado, peeled and cut into small cubes
1 cup grape tomatoes, halved
small handful cilantro leaves, chopped
1 t capers, chopped
juice of one lime
salt and plenty of freshly ground pepper

Combine the cucumber, avocado, tomatoes, cilantro and capers in a bowl and mix lightly. Squeeze on the lime juice, season with salt and pepper, and serve.