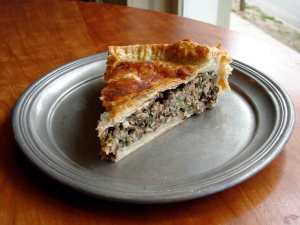 It’s national pie day! Who knew? Not me. And yet, strangely, I made a big delicious pie, only last night. And not just any pie, but the ur Ordinary pie, the pie that started it all. I feel like the kitchen gods have left me, lately. They’ve fled the city with their suitcases in hand, not stopping to say goodbye or leave a forwarding address. It’s not just that things haven’t been working out culinarily (they haven’t), it’s not just that things I’ve made before aren’t turning out the way they did last time (they aren’t), it’s that I’m not in the mood. I still want to cook and eat, but I feel sort of foolish and despondent about it. I’ve lost some part of my appetite that’s hard to define. I know it doesn’t really matter – it’s just a dinner or a batch of cookies, there will be plenty other meals, thousands of other cookies, but it doesn’t help that it doesn’t matter. That’s part of the problem! It’s so easy to forget about the importance of ordinary tasks, about the extraordinariness of doing them, not well, but with a full heart. It takes an effort to make these tasks, these inherently necessary and essential tasks, significant as well. I haven’t had the energy to do that, lately, so I thought I’d start at the beginning. Go back to the comfort of making the first thing that gave me deep pleasure to invent and to share. Malcolm and Isaac are crazy, creative artists, but they both have things they draw over and over, that they return to and reinvent from time to time. Little figures, eccentric characters, that show up frequently in their work. They feel good about having invented these characters, they know they can draw them, and it seems to give them confidence to go back and revisit – from that safe place, they can venture off into unknown realms. I would imagine for a musician trying to learn something new, it would be heartening to go back and play the first piece you knew well, the first piece that made you feel confident enough to share with an audience. And so it is with this pie. In making it I remembered the joy of playing with dough, of combining flavors and textures. In serving it to an appreciative audience, I remembered the pleasure of sharing something I’m happy to have made. It’s not much, it’s just a meal, I know it’s trivial in the broad scheme of things. We have to eat, we have to feed our children. I’m starting to remember again why that matters.

This pie has some of my favorite flavors! The crust is simple, but there’s lots of pepper in it. It has french lentils, which I love.

And roasted mushrooms, which I also love. I combine these flavors a lot, because they’re my favorites, but this is them in one big package.

Here’s Train to Chicago, by Drink Me, which happens to be the only song I can play on the guitar and sing all the way through.

In a large bowl, combine the flour, salt and pepper. Grate in the frozen butter. Mix it in with a fork until you have a piece-y texture – like fine crumbs. Add just enough ice water to pull it together into a workable dough. Knead for under a minute, till everything is nicely combined. Form into a flattened ball. Wrap in foil and chill in the fridge for at least half an hour.

Roasted mushrooms, made this way. (with sage, rosemary and thyme)

French lentils made this way.

2 pieces stale whole wheat bread, processed into crumbs
1 cup mixed nuts, processed into small pieces (but not puréed, you want some crunch)
1 cup (+/-) grated cheese. I used sharp cheddar and smoked gouda, but you can use any kind you like
2 eggs, beaten, reserve 1 T to brush the top
pinch nutmeg
salt and plenty of freshly ground pepper

When you’re ready to assemble everything…

In a large bowl combine the mushrooms and about 1 1/2 cups lentils. (Save the rest to toss with rice, pasta, or salad greens).

Warm the olive oil in a large skillet over medium heat. Add the pepper flakes. When the oil is hot, drop in the spinach. Sautée for about five minutes, till it’s wilted but still very bright, and the pan is quite dry. Let cool till you can handle, and the roughly chop. Put that in the bowl with the mushrooms and lentils.

Add the nuts and breadcrumbs to the bowl. Grate in the cheese, and mix well. Stir in the eggs.

Lightly butter and flour a large cake pan or springform pan. Divide the chilled dough into 3/4 and 1/4 pieces. On a floured surface roll out the large piece to be about 1/8th inch thick, and large enough to fit up the sides of your pan. Fit it over the pan, and press the edges down and around to form a lower casing. Don’t worry about the edges being perfectly neat.

Bake for 25 to 30 minutes till the top is puffed and crispy and golden brown. Allow to cool and set for a few minutes before turning it out of it’s pan.

4 thoughts on “Double crusted pie with roasted mushrooms, french lentils and spinach: The ur Ordinary pie”