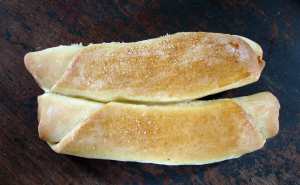 Ezra Jack Keats seems like somebody I’d like to spend some time with. Like Ozu and Tati and Vigo, he seems like somebody that has a lot of answers but wouldn’t feel compelled to tell you about it. So you’d just have to spend some time with them, to listen and learn. He is, of course, the author and illustrator of The Snowy Day, as well as 21 other books. The Snowy Day tells the story of Peter, a little boy who wakes up to find that it has snowed. And then it describes his day – walking through the snow, making foot prints, making tracks with a stick, wanting to join a snowball fight but understanding that he’s too little when he gets knocked down with a snow ball, trying to save a snowball and surprised when it disappears in his pocket in the warmth of his house. It’s a perfect book. The language is simple and haiku-like, the illustrations a jumble of color and movement. The Snowy Day was published in 1962, which also happens to be the year the name of a crayola crayon was changed from “flesh” to “peach.” Peter is black, but that’s never mentioned in the text, and the book is not about that. In our literary history black characters had frequently appeared as caricatures or background figures, but Peter is just a little boy, just Peter, so full of personality and charm, so fully conjured with so few words. Keats has said, “My book would have him there simply because he should have been there all along.” The book is about the wonder of walking in a world transformed by snow… “I wanted The Snowy Day to be a chunk of life, the sensory experience in word and picture of what it feels like to hear your own body making sounds in the snow. Crunch…crunch…And the joy of being alive…I wanted to convey the joy of being a little boy alive on a certain kind of day—of being for that moment. The air is cold, you touch the snow, aware of the things to which all children are so open.” Like all of Keats’ books, the problems facing the boy are small and real – not as dramatic as being chased by death eaters, maybe, but all the more compelling for being universal and recognizable and honest. All good books and films about children are not about having children – not cynically appealing to what some focus group has suggested would sell to a certain age group. They’re about being children, about always being a child in certain situations, like when the snow falls. or when you feel inadequate or disappointed, or left out of a crowd. Keats has said that discovering collage made him feel like “…a child playing…I was in a world with no rules.” And it feels exactly like my boys’ lives and their creativity…pulling a bit of something from here, a scrap of something from there, and piecing it all together in their teeming, colorful little brains. It’s a good way to experience the world and connect everything you see and hear and feel…aware of the things to which children are so open. Keats understands.

These rolled up buttery rolls turned out really delicious! The perfect thing to eat after coming in from the snow! I wanted them to be really really soft and tender, so I added milk and butter and an egg. And I wanted them to be fun to eat, so I flattened them and then rolled them up. They were fun to eat! We could pull apart each soft layer. We could fill them with greens and beans, or with scrambled eggs the next morning. They’re very versatile, too. I added a bit of pepper in the layers, but you could add herbs or nuts or cheese. Or cinnamon sugar, if you want them to be sweetish. Or chocolate chips, if you want them to be really sweet!

Here are two songs by Elizabeth Cotten, another of those people who seems to have all the answers.

Warm the milk in a small saucepan to be just the temperature of your body. Mix half a cup with the yeast and sugar and set aside for about fifteen minutes. Put two tablespoons of butter in with the rest of the milk and leave to melt.

In a large bowl, combine the flour and salt. Make a well in the center and add the butter, milk, egg, and yeasty milk mixture. Mix with a spoon until you can’t any more, and then mix with your hands until everything is well combined. Add just enough flour to make a workable dough.

Knead for 7 to 10 minutes until soft and elastic. Butter a large bowl, drop the dough in, turn it around so that the whole surface is buttered.

Set aside in a warm place for about two hours.

Punch/fold down the dough and divide it into 6 small balls. Roll each ball, on a floured surface into a round about 10 inches in diameter and 1/4 inch thick.

Grate frozen butter onto the round, in a thin and even layer. If you like, grate some fresh black pepper on each round as well. You could also add herbs, nuts or cheese at this time. Roll the dough loosely from one end to the other, making a cylander. Place each cylander side-by-side on a lightly buttered baking sheet and leave in a warm place for another 45 minutes to an hour.

Preheat the oven to 425. Brush the top of each roll lightly with reserved beaten egg and sprinkle with salt.

Bake for 25 to 30 minutes, until the rolls are puffed and golden brown.