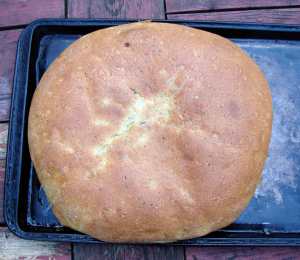 Here at The Ordinary, we’re not quite well. Isaac has an actual fever, and the rest of us feel crummy in the head, throat, and spirits. Add to that the chilly drizzliness of the day, and you have a general idea of the mood here. Actually, I quite like a day off with Isaac, as long as he’s not miserably ill. He’s such a little chattery singer, and even as his fever rises he continues a cheerful warble. We’ve cuddled on the couch; made a paper sea-dragon from a book; drawn mixed-up animals, (which Isaac decided he could name any way he wanted to, and he could spell the name any way he wanted to, because he invented them. They won’t be on the test!); discussed the philosophical and moral implications of the statement that it’s hard to be mad at Clio because she’s so cute; made a pancake with cinnamon (Isaac wanted me to tell you about that!); and watched a movie. I’m going to keep it brief so I can get back to the cuddle-couch, but I want to tell you about the movie we saw, because it was remarkable and beautiful. It’s a short, wordless, animated version of Peter and the Wolf made by Suzie Templeton. Technically and aesthetically, it’s wonderful. The film takes place in a bleak and dingy village on the edge of the woods. It’s a modern setting, replete with graffiti and chain-link fences, but even the dreariness is gorgeously rendered. The characters – a boy, a runner duck, a hooded crow, a fat cat, a blue-eyed wolf, and a grumpy old man – are full of personality and glow with inner life. The film brings a real sense of compassion and soul to the familiar story – it’s about friendship and forgiveness, cruelty and kindness. You understand, as you watch, that prey can easily become predator, bullies can be bullied, and cruelty and aggression may be valued and rewarded, but that doesn’t make them right. Everybody wants to live, and empathy extends to all creatures. I can’t wait to watch it tonight with Malcolm and David! 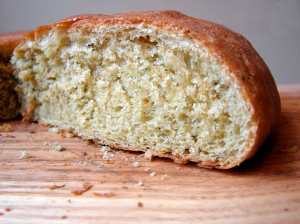 I’m very very excited about this bread! It’s the oddest thing, but I dreamed about it two nights in a row, and then I woke up and spent the rest of each night trying to figure out how to make it. Colcannon, of course, is an Irish dish that contains mashed potatoes and kale or cabbage. In my dream I made it into bread, and so…in real life I did just that! It’s a lovely, light but dense, pale green bread with darker green flecks. The flavor is very subtle – you don’t actually taste kale, just a nice savoriness (which means small boys will like it!). I added plenty of freshly ground pepper for flavor, and an egg and a bit of milk to make it soft inside. It’s got a nice crispy chewy crust. I made one huge loaf, which is very seussical looking, but it probably would have been more practical to make two smaller ones. Maybe next time!

olive oil for the baking sheet and the bowl

Combine the yeast, sugar, 1/3 cup flour and 2/3 cups warm water in a large bowl. Set aside in a warm place for at least half an hour to get all bubbly.

Meanwhile, bring a medium-sized pot of water to boil over medium heat. Boil for about half an hour till the potato is nice and soft. Process this with the 1/2 cup of warm milk until completely smooth.

In the same pot of water (if you like) boil the kale for about fifteen minutes, until it’s soft but still bright. Remove from the water, (but save the cooking water). Combine the kale with 1/2 cup cooking water in a processor and process until very finely chopped, but not pureed. You want some flecks of green.

Add the flour, kale, potato, salt, lots of black pepper and the egg to the yeast mixture, and mix well. Combine with your hands to make a workable dough. It will be a soft, sticky dough. Add as much flour as you need to make it kneadable – add a small amount at a time, so you add only as much as you need. (I think I added at least another half cup of flour.) Knead for seven to ten minutes, until it’s soft and elastic, and when you poke it with a finger it springs back.

Put a small amount of olive oil in a large bowl. Put the dough in, and turn it over so it’s coated on all sides.

Cover with a damp cloth, and put in a warm place for about two hours to double in bulk. Punch it down. Lightly oil a large flat baking sheet. Form the dough into one large or two smaller balls, and position accordingly on the sheet. Leave to rise in a warm place, uncovered for another 45 minutes to an hour.

Preheat the oven to 450. Brush the top of the dough with water, and put a small dish of water in the bottom of the oven.

Bake until the whole top is golden brown and firm to the touch, and it sounds hollow when you tap it. The time will vary according to weather you’re baking one or two loaves. For one large loaf it took about half an hour (in my oven!)

Let cool briefly, and then eat!