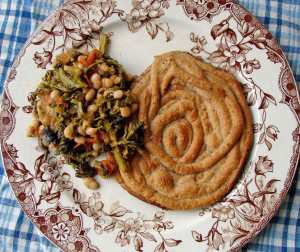 “Daddy, do you want to play with star wars toys?” asked Isaac in his bright voice. “Nobody’s said that to me in thirty years!” said David. (He did want to play.) I remember the first time I saw Star Wars. It was 1977 (of course) and we waited on line. We saw it in a theater in a mall, and it was a seventies mall, all orange and brown and drab and fluorescent. And of course we loved the movie! It’s so bright and inventive and richly imagined. I love to think about George Lucas with this whole universe inside of him, and how joyful it must have been to make the movie and to watch the movie, and to see that people liked it. I love the fact that Star Wars has a history, even the first movie had a future and a past, and though it would be decades before we’d know the full story, even in that first (fourth) film, you could feel the haunting weight of memory. Which is a sort of a beautiful thing in a film! Star Wars is about generations, so it seems fitting and wonderful that we can share it with our sons. I love that our boys love it! (Actually, I like the fact that all boys love it!) It feels good to share this modern mythology with them, a mythology that’s probably shaped our consciousness more than we know! Like most mythology it’s about good versus evil, strength versus weakness, in the world at large and within ourselves. It’s about the struggle to understand where we’re from and where we’re supposed to go, and who we should trust to go with us. It’s about discovering that we have some invisible power within ourselves that we have to harness and struggle to control, and learn to use for good. Epic! The other night, whilst watching Star Wars for the gazillionth time, we played a game. I named Star Wars characters, and David and the boys had to try to draw them from memory. It was more fun than it sounds! Unless it sounds really fun to you. I LOVE the pictures they drew, and I love the way they illustrate visual memory, and the working of busy minds, and the fact that drawing ability has been handed from father to sons. Here they are… 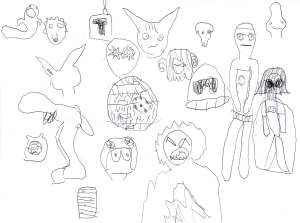 So today’s Sunday interactive playlist is about generations…about a sense of history, a memory of the past or an anticipation of the future. Advice from elders, sass from youngsters…any of this will do! 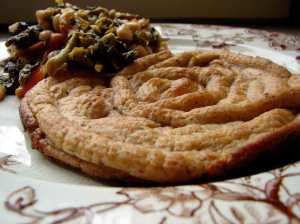 ANd this crazy meal was the result of some leftover mashed potatoes and a desire to play with my pastry tube. I decided to combine the potatoes with some steamed cauliflower, some pecans and some tarragon, (as well as some eggs and cheese) and make a smooth thick batter I could shape into a sort of nest. And since all of these things (potatoes, pecans, cauliflower, eggs and cheese) are sort of mild and comforting, I thought I’d combine them with something bright and saucy, like broccoli rabe and tomatoes. So that’s what I did! I thought it all turned out very tasty. You pecans and tarragon are very nice together. You could serve these with any kind of greens, or any sort of saucy dish that you like.

Combine everything in a food processor, and process till quite smooth and thick. Let sit about 15 minutes.

Preheat the oven to 425. Stuff the batter into a pastry bag, and lightly butter a baking sheet. Pipe spirals about 5 inches wide, making the edges two or three times as thick. (If you don’t have a pastry bag, dollop 6 large spoonfuls of batter, and mold it with the spoon to be shallower in the center.

Bake for about twenty minutes, till they’re nicely browned on top. Turn off the oven and let them sit for about five minutes more, to dry out a bit. Keep an eye on them that they don’t burn on the bottom.

In a large skillet over medium heat warm the olive oil. Add the herbs, pepper flakes and garlic. Cook for under a minute, until the garlic starts to brown. Add the tomatoes. Stir and cook until the become quite soft – breaking them up with a spoon as they cook. Add the white beans, stir and cook. Add the broccoli rabe, olives and capers, and continue to stir and cook until everything is nicely warmed through and saucy. Add the butter and balsamic, and season well with salt and pepper. Serve over the cauliflower and potato nests.