Isaac gave me a card for valentine’s day. It’s got a three-dimensional heart made of red tissue paper flowers, and it says “my heart belongs to you.” Sweet. A fairly traditional valentine’s day sentiment. Nicely made card. It undid me! I get weepy when I think about it! The thought of my Isaac’s heart – so sweet and generous, odd and contrary, so singularly Isaac – the thought that it’s mine, at least in part, threw me for a loop. The gift and the responsibility of being loved by both my boys is almost overwhelming, if I stop to think about it, and my lovely card made me do just that. I like the word, “unmanned.” It’s an old-fashioned term, I know, but I like to think about men striving to be manly, working to be strong and just and mature. And I like the idea that, in an instant, some emotional force can dissolve all of that, and leave him feeling like a boy, raw and bewildered. Sometimes I feel “unwomanned.” I don’t walk through the world thinking about being a woman or a mother. Honestly, despite my advanced and advancing years, I don’t really feel old enough, most of the time. Being a mother is a fairly common pastime. Everyone in the world has one. But when you take a moment to consider motherhood, it’s awesome, it’s terrifying, it’s wonderful. Isaac’s heart belongs to me, and I made that heart! And I’m responsible for keeping him healthy, and feeding him good foods that will help that heart to grow. I work to be strong and just and mature – to be worthy of the boys’ love; to be a good example for them; to give them some core of conviction and kindness. But sometimes it feels as though all of that falls away in a moment – not in a bad way, but in a way that makes me feel more awake, more keenly aware of my power and privilege in being important to the boys. Last summer Isaac had an echocardiogram. I sat with him for an hour in a darkened room, while we watched the workings of each inch of his beautiful beating heart. It was almost too much information. I felt undone, but I had to be collected when the lights came on – I had to listen attentively, ask relevant questions, reassure Isaac, and answer his sweet anxious worries. It’s such a strange world! We all walk around each day with our hearts working so inexplicably and so persistently, and with those hearts we love people, so inexplicably and so fervently. And we can’t even think about it, or we’d be so overwhelmed we’d never get out of bed! 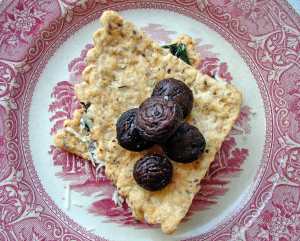 Last night, for valentine’s day, we took some time off. I made a special, strange meal. We ate together and talked together, and we let everything slide. We missed a basketball game and a meeting. We cuddled on the couch and watched a movie, and decided to skip the showers and the evening reading. It feels good to be irresponsible, some times! And, guess what? I’m a mother, so if I say it’s okay, it’s okay!! It was a really nice night. And the dinner was strange! I wanted to make something a little fancy, and less pedestrian than my usual fare. So I made some large fan-shaped crispy crackers, flavored with sage and smoked paprika, and crunchy with hazelnuts. I piled these with layers of sauteed chard, roasted mushroom & french lentil puree, cheese, and whole, small roasted mushrooms. It was very fun to make, and very fun to eat, too! I thought all of the flavors and textures were nice, altogether. I used my 8-ish inch tart pan ring to cut the dough into fluted circles, and then I cut those into quarters. You could use a medium-sized bowl with a thin edge. Or just cut it freehand with a knife. Or make circles instead of fans, by cutting with a large glass. Whatever, man!

Here’s My Heart, by Louis Armstrong. It’s bright and cheerful and serious and thoughtful at the same time, like my Isaac.

Toast the hazelnuts in a small dry saucepan of toaster oven until the skins begin to darken and crack – maybe five minutes. Wrap them in a clean tea towel and leave for a few minutes. (At this point I always pick up the tea towel to dry my hands, scattering hazelnuts all over the floor. Don’t do that.) Rub the hazelnuts in the towel to loosen some of the skins. Rub them between your fingers to remove the rest – or most of them. Don’t worry about a bit of skin. Put the hazelnuts in a food processor or blender and blizz them until they’re like fine crumbs. You don’t want flour, you want to retain some texture and crunch.

In a large bowl, mix the flour, hazelnuts, salt, paprika, sage and black pepper. Grate in the butter, and mix till you have a coarse and crumbly texture. Stir in the butter, and then add just enough ice water to make a workable dough (maybe 1/4 cup). Pull into a ball and knead for about a minute, to be sure everything is incorporated. Wrap in foil and chill for about an hour.

Preheat the oven to 375. Roll the dough to be about 1/8th inch thick. Cut with a small tart pan or a bowl that’s about 8 inches wide. Cut each circle into 4 quarters. Transfer to a lightly buttered baking sheet. Sprinkle with coarse sea salt. Bake for about 15 minutes, till it’s starting to brown on the bottom. Transfer to a cooling rack. Makes about 24 fans.

Warm the olive oil in a large skillet. Add the garlic and pepper flakes, and cook for just under a minute, until the garlic starts to brown. Add the chard and a spoonful or two of water. Cook until the chard is wilted but bright and the pan is fairly dry. Transfer to a bowl and season with salt and pepper.

Process mushrooms in a food processor so that they’re very finely chopped. (Or chop very finely by hand) Sprinkle with the herbs, and stir those in, then stir in the oil. Spread in a single layer on a baking sheet.

Preheat the oven to 425. Roast the mushrooms for fifteen or twenty minutes, till they’re quite dry and browned.

In a small saucepan combine the mushrooms and lentils. Stir in the wine, and mix and heat through. Then add the butter, cream and balsamic. Process in a food processor or blender until you have a chunky purée. Season with salt and pepper.

Mix the mushrooms and olive oil, spread in a single layer on a sheet, and roast in the 425 oven (see above) for about twenty minutes, till the mushrooms are nicely browned.