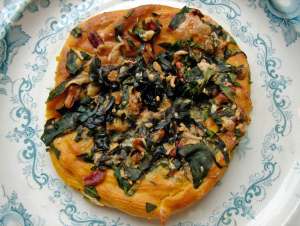 Last night Malcolm and I walked down to the river. It had been cloudy all day, and the sky was still thick and pale and glowing. When we reached the middle of the bridge, Malcolm told me to look down the river upside-down, so I did. Dizzyingly beautiful! The clouds and the water stretched away from us in swirling rivulets, reflecting in each other and cutting a silvery moving hourglass shape into the sharp black pattern that the land made on both sides of the river, stretching together in the distance. While we walked home, Malcolm told me his plan to replace war with a giant nerf gun competition. If you’re hit by a nerf dart, you have to sit down and let the others keep playing. This way all of the conflicts of the world would be solved, and nobody would be hurt. He’s heard a lot about guns, lately. We all have. we’ve all been thinking about it a lot, or trying not to think about it. Prepare yourself to hear something very shocking, because, here at The Ordinary, we are ready to come out very strongly in favor of gun control! I know! It’s hard to believe that the proprietoress of a vegetarian food blog would take such a stand! This is one of those issues that makes me feel slightly crazy, because I don’t understand how it can be an issue at all. In the same way that I don’t understand why we sill fight wars, I don’t understand why guns are even an option. Honestly, I have two little boys, I’m aware of the fascination that guns hold for them. If you take their toy guns away, they’ll use sticks as guns, if you take the sticks away, they’ll use their fingers. So they have nerf guns and water guns, and I do see why these are fun – it adds a moving target to a game of tag. But nerf guns and water guns don’t hurt anybody, and that is, really, the only purpose of a real gun – to hurt or to kill. (I suppose you could use a gun to smash garlic, but how practical would that be?) And you can go ahead and blame movies and video games that glorify guns as well, because, guess what?! I’m not a huge fan of those, either. If we didn’t have guns we wouldn’t have to criticize video games for making them look appealing. I realize that I can’t add much to the conversation on gun control that hasn’t already been said, but I’d love to move it to the left, to reframe it, so that when we meet at the middle, the middle doesn’t seem like the frightening place that it is now. I’ve seen lots of so-called “gun nuts” spouting lots of, what’s the word? shall-we-say, vociferously-argued arguments. Well, I’d like to be an anti-gun nut. I’d like to say that merely wanting a gun should qualify you as too crazy to own one. I’d like to say that when the “rational” rationale for owning a gun is that you want to kill animals with it – that’s not rational at all, it’s horrible and depressing and should also qualify you as too crazy to own a gun. I’d like to say that no stubborn, paranoid misreading of our constitution or any other document makes a good argument for carrying guns. Surely the whole point of the constitution was to establish a government based on intelligent understanding and measured reasoning, with enough checks and balances that an armed revolution would never be necessary, as long as people behaved decently and rationally. If you want a gun just because somebody might take it away from you, you’re crazy, you can’t have one. If you want a gun because you don’t understand how government works, and that makes you nervous, you’re crazy and you can’t have one. If you want a gun because it makes you feel powerful, you’re crazy and you can’t have one. I want to turn the whole conversation upside down, starting from a place where people are generous and gentle and kind and expected to behave that way. Where the mistrust that makes people cling to their guns is directed at the gun companies who try to keep them in fear and ignorance for their own profit, so that not buying a gun is an act of rebellion and independence. I’d like to live in a world where we don’t need to talk about gun control, because nobody wants a gun, because they love all people and animals too much – because they understand the value of life. I’d like to believe that this is possible, that this is what most people want.

And I’d like to live in a world where the most fun toy is not a gun but a pastry tube set. Holy smoke, I got my first set yesterday, and I’m so excited! It’s so much fun, so seussically nonsensical, so full of possibilities. And yet practical as well, because you get to eat whatever you make! These little butternut choux nests are among my favorite meals that I’ve made in some time. I used a fairly basic choux recipe, and added some roasted garlic and roasted butternut squash puree and some fresh thyme, fresh rosemary, smoked paprika and nutmeg. Then I piped this dough into lovely nests, about 4 inches across, and before I baked them I piled in some baby spinach, toasted pecans and smoked gouda. They turned out puffed and crispy on the outside, nice with the crunchy pecans. And soft and flavorful and comforting inside. Even the boys liked them! If you don’t have a pastry tube, you can easily make these by dropping little mounds of dough and pushing the center down with your hands or a spoon. It won’t be as pretty, but it will still taste as good.

Here’s When the Gun Draws by Pharoahe Monch It’s sweary, but he’s angry.

Preheat the oven to 425. Cut the top and bottom of the squash, and cut it in half length-wise. Scoop out the seeds. Place the squash face-down on a cookie sheet, and tuck the garlic into the hollow where the seeds were.

Roast for 40 – 50 minutes, until the squash is browned and collapsing and starting to caramelize on the edges. Let it cool till you can handle it, and then scoop out the flesh of the squash and the garlic into a processor or blender. Process until smooth. You should have about 1 cup.

Warm the milk in a medium-sized saucepan over medium heat. Add the butter and the herbs, spices and salt. When the butter is melted and the milk is starting to froth, add the flour and beat until you have a smooth paste. Stir in the butternut purée. Remove from the heat and allow to cool for a few minutes, so that you don’t cook the eggs.

Beat in the eggs one at a time.

Preheat the oven to 400. At this point, if you have a pastry bag, fill it with the dough, using a tip that will give you about a 1/3 inch trail of pastry. lightly butter a baking sheet.

Pipe 6 “nests.” Starting from the center, pipe a spiral of dough leading out until you have a circle about 4 inches across, now pipe one or two more layers on the outside edge, building it up to form a little cup.

If you don’t have a piping bag, make six little piles of dough, and with a cool wet hand or spoon, press the center down, so that the edges are higher.

In a large bowl, combine the spinach, cheese, pecans and lots of freshly ground pepper.

Bake for about half an hour, until the nests are puffed and golden, the cheese is melted and the nuts are crunchy.