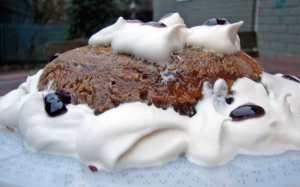 In which Claire, who doesn’t speak French, bakes her way through the cake section of a French cookbook from 1962.Yesterday we shared some poems and passages about windows. “But Claire,” I heard you saying, “You know what else is beautiful? Photographs of windows, and film scenes that involve windows!” “Of course!” I reply enthusiastically. “Two things I have long loved!!” It’s true, I do love photographs of windows. I find them so inviting and mysterious, so suggestive of the story of a person’s life, and yet a little melancholy and lonely at the same time. I’ve mentioned Eugene Atget before, in these virtual pages. Many of his photographs involve windows – store windows and tenement windows – windows with the ghost of a person in them, a whirl of light that represents movement, a row of grinning dummies. 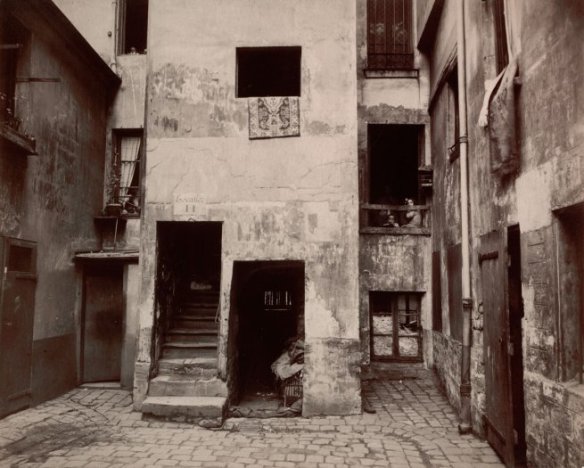 Or simply an emptiness or a shadow, a hollow that holds the secret movements of the people who live there. Jean Renoir, Atget’s compatriot, adds movement and depth to images of Parisian windows to create a poetry of light and shadow, a shifting frame within-a-frame that allows him to play with interior and exterior space. Renoir is famous for employing a large depth of field, so that objects in the background and middle ground are just as sharply focussed as those in the foreground, and frequently he’ll use a window to frame the action, so that two stories occur at once in the shot, distinct but related. In Grand Illusion, the soldiers’ exercises in the background create a source of mounting tension in contrast to the genial conversation inside of the window, and when the camera pulls back at the end of the scene, so that we’re outside the window looking in, it casts the men as characters in the story about to unfold. In Boudu Saved from Drowning, the parlor drama on the inside is contrasted (in a gorgeous tracking shot) with the world of the parisian streets outside the window, as observed through a telescope. And this passage from Le Crime de Monsieur Lange is beautifully busy with activity in and out of windows, dividing people even as it connects them, in a drama that illustrates the power of people working together. The murder scene, seen from across a street, entirely through windows and doorways, sets the frames of windows almost as the individual frames of the film itself, in a masterpiece of life and light and shadow – a sort of love letter to the pure joy of watching a story unfold. Beautiful.

French cakes seem to often involve crushed cookies and cream. You really can’t go wrong with crushed cookies and cream! This particular cake combines layers of a thick apple compote with layers of cookie crumbs and butter. I misread the recipe, or, I suppose, I mistranslated it. It said “biscottes,” but I read “biscuits.” A small amount of lazy research suggests that “biscottes” are actually melba toast. BUt it was too late! I’d already made some spice cookies to crumble for crumbs. And I think it was a happy mistake, because the spice cookies are perfect with the apples!! You could probably use digestives or graham crackers with equally pleasant results. These cookies are worth making just to eat, though, because they’re very tasty, and you only use 9 or 10 in the recipe. My finished cake wasn’t the prettiest, because I don’t have a means to pipe the cream in attractive patterns, but it tastes absolutely delicious, so who cares how it looks?

Here’s Listz’s Totentanz from Rules of the Game.

Preheat the oven to 350. Cream together the butter and sugar till light and fluffy. Beat in the egg and vanilla. Add the dry ingredients and mix till well-combined.

Lightly butter two baking sheets. Drop the batter by spoonfuls on the sheets, leaving a little room around them to expand. Bake ten or fifteen minutes till the bottoms start to brown, and they feel firmish to the touch.

2 1/2 pounds apples (8 or 9 medium-sized apples)
1 cup sugar
1/2 t cinnamon (or to taste)
1 1/2 cups cookie crumbs, from spice cookies (above), or any cookies you like
3 T butter
1/2 cup heavy cream, whipped
1 t vanilla
2 T powdered sugar
a few spoonfuls of gooseberry or blackberry jam (or whatever flavor you like!)

Peel and core the apples, and chop them into 1/3 inch dice. Put them in a medium-sized pot with the sugar, the cinnamon and about 1 T of water. Stir to mix, and then cook over medium heat for about an hour, till the apples are soft, and the juice is reduced and syrupy. Set aside to cool.

Combine the crumbs and butter in a small saucepan over low heat, and cook just till the butter is melted. Stir to combine completely.

Butter a small round bowl. (I pressed a square of foil in the base, so it would be easier to de-mold at the end.)

De mold the cake by running the bowl carefully under warm water. It should come out easily. Turn it out onto a pretty cake plate.

Whip the cream until firm but not completely stiff. Gently stir in the vanilla and sugar. Make a pretty border of cream around the cake, and dot the surface in a few places. Put a small dot of preserves on the little mounds of cream. Chill till the cream has set a bit, and serve.