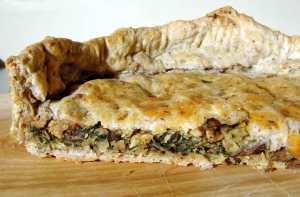 This is a very Dickensian time of year. I want to read Dickens, watch adaptations of his novels (good or bad), eat Dickensian food (like this pie!) drink hot gin punches. In short, I love Charles Dickens – I always have. I don’t care what anybody says about him. I don’t care if people think he’s nothing but an overly sentimental Victorian fuddyduddy. I’m not blind to his faults, I will admit that he can be a little ham-fisted with the sentiment at times. But he’s also darkly, bitingly funny, political, warmly human, and even light-heartedly absurd. His books contain everything a novel should – a broad, carefully calculated over-arching plot that feels complicated yet effortless; an expansive cast of characters so diverse, eccentric and detailed that they feel alive; and a powerful mix of humor and pathos, sweetness and brutality. What’s my favorite Dickens novel? I hear you ask. And without a second’s hesitation I will tell you, Our Mutual Friend. It’s a dark, dirty novel, swirling with life and death, like the river it describes. It’s about the river, and the bodies found there, and the people that make their living there, and those that try to escape its inky pull. Amongst the eccentric, extensive cast of characters are some of the most appealing Dickens (or anyone else) has ever created. There’s Eugene Wrayburn, witty, idle, disappointed, disappointing – the culmination of Dickens’ career-long treatment of the theme of a cruelly seductive wealthy man who ruins a poor young woman. There’s Wrayburn’s friendship with Mortimer Lightwood, a real friendship, generously observed. And Wrayburn’s love for Lizzie Hexam, who is far more than a poor but pretty face. And Lizzie’s friendship with Jenny Wren, one of the oddest characters in literature. She’s the twisted and crippled embodiment of the Victorian ideal of a child-woman – an ideal that Dickens helped to perpetrate. He’s created this bizarre monstrous little creature that stands as a criticism of his own work. She’s a perpetual child, physically, frail and beautiful, but her words are as sharp as needles, and she becomes a kind of chorus or surrogate for Lizzie, able to say the things Lizzie’s politeness will not allow her to express. She’s remarkable, I tell you! And of course this is only a small handful of an enormous cast of characters, but I can’t go on and on about it here.

Do you like Dickens? What’s your favorite Dickens novel?

Instead, I’ll go on and on about this pie. I love a double-crusted pie in the wintertime, one with a tall crispy crust that holds in any mashed potatoes you might pile on top. In some ways this is my ur-winter pie. I love the combination of roasted mushrooms and nuts, and smoky cheese, and savory spinach. The beans add substance and flavor. I love the combination of sage and rosemary with a bit of nutmeg. This pie has all those things! In this case the nuts are in the crust, which is light and crispy, and the filling is dense and satisfying.

Here’s the Dickensian Decemberists with The Chimbley Sweep.

Combine the flour, sage, pecans, salt and black pepper in a large bowl. Grate in the butter, and mix it in with a fork until you have a coarsely crumbly mixture. Add enough ice water to pull it together into a workable dough (about 1/2 cup). Knead very briefly so that you’re sure the butter is incorporated. Wrap in foil, and refrigerate for at least an hour.

Warm the olive oil in a large skillet over medium heat. Add the garlic and herbs, and cook for about a minute until the garlic starts to brown. Add the spinach with the water still clinging to it’s leaves. Stir and cook until the spinach is wilted and the pan is fairly dry.

In a large bowl, lighly mash the beans with a potato masher or fork. You don’t want them completely smushed, just broken down a little. Stir in the bread crumbs and spinach. Mix in the mushrooms. Stir in the cheese. Stir in the nutmeg, salt and pepper, and taste for seasoning. Mix in all but 1 T of the beaten egg.

Preheat the oven to 425 and butter and flour a springform pan. Roll out 3/4 of the dough to be about 1/4 inch thick. Don’t worry if holes forms around the pecans, you can always patch them up later. Line your springform pan with the dough, leaving enough to hang over the edges all the way round. Pinch some extra off the edges to patch any holes that form.

Spread the filling in the dough shell. Roll out the remaining quarter of dough to be just larger than the pie, and place it on top. Roll the edges down, pressing together as you go. Press the edge with the tines of a fork up against the sides of the pan, to make a thin 1/2 inch rim all around the pie. Prick in a few places with the fork, coat with egg, and pop in the oven.

Cook for 25 – 30 minutes, until the top is golden brown. Unspring the sprinform pan, and let the pie sit for about five minutes before serving.