Malcolm is home sick from school, and I’m not feeling 100% myself. We’re having such a nice day! We had a lot of big plans, but we’re not doing any of them. Mostly, we’re sitting on the couch, glad to be together, and reminiscing about the time Clio sneezed 6 times in a row.

I thought this was such a nice meal. It started as a mistake, almost, so it’s an example of taking a culinary wrong turn and finding yourself on an even better road! I had the idea of roasting “steaks” of butternut squash. I thought I’d try marinating them. I know they wouldn’t absorb as much marinade as, say, eggplant or mushrooms, but I thought they might absorb some. So I cut them about 1/3 to 1/2 inch thick. Then I made a marinade of rosemary, sage, garlic, port wine, balsamic and olive oil. I let them sit for more than an hour, turning them once. They did take on some of the color and flavor! Then I had the bright idea of trying to dip them in egg and bread them, in the manner that I make eggplant. This didn’t work at all! I think if I’d steamed them first, they would have absorbed more of the marinade, and been better able to hold onto their crust. As it was, the crust turned crispy and delicious, and then came right off the steaks. Did I panic? I did not. I scraped the crust (made from bread crumbs and pistachio kernels) right off of the steaks, and I mixed it in with my mashed potatoes! I’d been planning to make hash browns with some leftover mashed potatoes, because Malcolm likes them. I didn’t know he did, but he told me at the reader’s breakfast at school he ate all of his hash browns, and Isaac’s and some other friends, too!! It’s funny when you learn something new about someone you know so well! They’re a bit like croquettes, I guess with the crumbs and nuts added in. I suppose if you put some cheese in, you’d have a meal! Anyway…the butternut steaks roasted up nicely without the breading – they were soft on the inside, and just browned and a little crispy and caramelized on the outside. And I used the marinade sauce, combined with some roasted mushrooms, to make a sort of gravy for the steaks. Everything was very nice together – a real meat and potatoes meal! 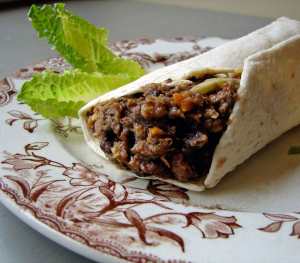 The next day, after work, I combined leftover hash browns, leftover mushroom sauce, and diced leftover roasted squash with black beans to make a filling for tacos. We ate it with warm tortillas, crisp romaine lettuce, basmati rice and some grated extra sharp cheddar. Also very delicious!! It was so good it would be worth making from scratch! It would make a good filling for a savory pie!

Put the squash in a single layer in a roasting pan. Mix the marinade together and pour it over the squash. Let sit for at least an hour, turning once or twice in that time. Preheat the oven to 425. Generously coat a baking sheet with olive oil. Place the squash on the sheet in a single layer, turning each one so it’s coated on both sides with olive oil. Roast for about 40 or 45 minutes, until the squash is soft on the inside, and browned and caramelized on the edges. Slice the mushrooms into different sized pieces. I processed about 1/3 in the food processor so that they were almost ground, cut 1/3 into a fairly fine dice, and left 1/3 in larger chunks. Coat them lightly with olive oil, and stir in the shallot. Roast them along with the squash, stirring from time to time, until darkened and a little crispy. This should only take about 20 minutes, then you can take them out and set them aside.

Meanwhile…Pour the marinade into a medium-sized frying pan. Maintain a slow boil over medium-high heat until it’s reduced by about half. Then add the mushrooms and the stock. Return to a boil, and cook till it’s just as thick and saucy as you like. Stir in the butter and the dash of white wine, if you’re using, and season well with a little salt and plenty of black pepper. When the “steaks” are done, spoon the mushroom sauce over each, as much as you like.

Boil a pot of salted water to just cover the potatoes. Boil the potatoes until they’re soft but not mushy. Drain. Return the pan to the hot burner (with the heat off) to dry it out. Then mash in the butter and milk.

Toss the bread crumbs and pistachios with a little olive oil – just enough to coat. Toast them in a toaster oven or regular oven until just browned and crispy. Mash them into the potatoes along with one egg. Coat a large skillet with olive oil, and warm it over medium heat. Press the potatoes in a thick layer on the sheet. Cook for about five minutes, until it starts to brown, and then flip them over. You might need to do this in a few parts. Continue to cook on both sides till brown and crispy. Season well with salt and pepper and serve.

Warm the olive oil in a large frying pan over medium heat. Add the shallot, red pepper flakes and oregano, sautée for a few minutes, then add the garlic, and sautée for a minute more. Cut the roasted butternut squash steaks into small chunks and add them to the pan. Add the black beans, and stir and fry for a bit. Stir in the leftover mushrooms and potatoes, in whatever proportions you like. When everything is warmed through, add the broccoli and a few tablespoonfuls of water or broth. Cover and cook until the brocolli is bright green and tender. Season with salt and pepper, and serve with warm tortillas, rice, grated cheese, lettuce and tomatoes.