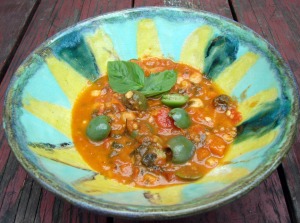 Isaac wants a baby orangutan for a pet, and so do I. Actually he just asked if I’d rather have an elephant, and I think I might rather. He’ll get the orangutan, and I’ll get the elephant. So we’re going to head down to the local animal shelter and see if we can find one of each. He’s home sort-of-sick from school, and watching a show about orphaned orangutans and elephants. They’re raised by humans and then returned to the wild. They’re all so beautiful you could cry! The shot of a herd of baby elephants, red with the dusty earth, running, eager, giant ears held high, following people with soccer balls, threw me for a loop. A loop, I tell you! The film centers on the two women that run the retreats. Rightfully so, I suppose, they’ve given their lives and probably lots of their money to these animals. David and I were thinking it would be interesting to see a movie about the people that work there, and care for the animals every day, as well. Orphaned animals can’t sleep alone. In the wild they cuddle with their mothers, and in this strange environment they have too many bad memories of why they became orphaned animals. There’s a shot of a man trying to sleep, with a baby elephant cavorting all around him. I well remember days of trying to cuddle a toddler to sleep. Can you imagine if the toddler weighed several hundred pounds?! And a scene with a woman cuddling a tiny baby orangutan, singing to him, and rubbing his tummy, as he frowns and struggles to keep his eyes open – well it kills me. I wonder what the lives of these people are like. Do they have children of their own? What strange hours they must work. What a demanding but rewarding job it must be! What kind of dreams do you have when you care for orphaned animals all day and night?

We’re back to stew season, here at The Ordinary! The evenings are drawing in, and it’s time for warm saucy meals. This particular stew extends the bridge between summer and fall. It’s full of fresh tomatoes and basil, chard from the farm, and a sweet roasted red pepper. And it has castelvetrano olives, which I love so much. They’re lovely and bright and juicy, and they’re very pretty with the tomatoes. I had mine with bulgarian feta crumbled on top, but if you leave that (and the bit of butter) out, you have a good vegan meal. Serve it with a salad and a loaf of crispy bread, and you’re golden.

Here’s Elephant Gun by Beirut. It’s a beautiful song, but it’s a sad story of elephant hunting, and it’s why these baby elephants are orphans.

Warm the olive oil in a large soup pot. Add the garlic. Before it browns, add the chard and chickpeas, the raisins, spices and the hot pepper. Stir in the roasted red pepper. Cook till the chard is wilted.

Add the tomatoes. Stir and cook. It should be fairly saucy (if your tomatoes were). If it’s not saucy enough for you, add a bit of water.

Bring to a boil, reduce the heat and simmer for about fifteen minutes. Add the olives.

Stir in the butter and balsamic. Season with salt and pepper.

Just before serving add the basil.

1 thought on “Chickpea stew with tomatoes, chard and castelvetrano olives”