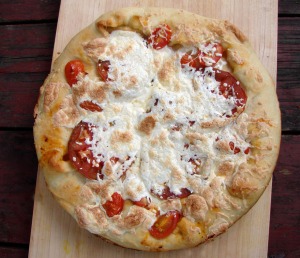 I talk a lot about Malcolm, so lets let him speak for himself, for once! This is a poem he wrote for class:

I Was—slow, an infant, a scooterer, funny, strange, a kindergartener, dumb, adventurous, curious.
I am—a climber, big and tall and strong, a brother, an athlete, a player of basketball, a free runner, a lover of nature, cool, rough and tumble.
But still—a question asker, a skateboarder, a vegetarian, a TV liker, a liker of junk, I won’t stop eating, a liker of toys, an inventor.

I love that! I love him! I’m so happy that he knows he’s strong, that he believes he’s cool and funny. And that he eats a lot! And since he won’t stop eating, I’m glad he helps me cook! I love when Malcolm describes something he wants to cook. He describes it with his hands – showing the exact dimensions and specifications. And he’s very sure about what he wants to make. He’s decisive, he’s decided. I’ll suggest something that might be easier or more traditional. And he’ll say, no, I want it like I just said! So that’s what we try to do. I fire questions at him, trying to establish the practical details, and he has an answer for everything. 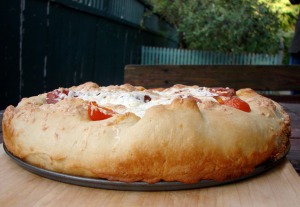 He wanted to make this tomato pie for days, and was disappointed each night at dinner when I forgot and made something else. So finally we made it. I had to work all day, so we started the dough in the morning, and just let it sit and rise all day long. It’s basically a pizza-dough crust. He wanted a double crusted pie, with “a quiche” inside – eggs blended with tomatoes and roasted peppers (and smoked paprika!). And on top of the top he wanted a layer of thinly sliced tomatoes and grated cheese. It turned out very good. Malcolm loved it, which is one of the nicest feelings in the world.

I let Malcolm pick the song to go with this pie, and he picked Brianstorm, by the Arctic Monkeys.

Mix the yeast, sugar, flour and water in a medium-sized bowl, and leave for at least half an hour to get foamy. In a large bowl combine the remaining flour and salt. Make a well in the center and add the yeast mixture and the olive oil. Stir to combine. Add enough water or flour to make it into a soft but workable dough. Knead for about 5 minutes. Roll in an oiled bowl, and leave for a few hours to rise.

Combine everything in a food processor, and process until smooth and pale.

TO TOP THE PIE

Preheat the oven to 400. Lightly oil a springform pan.

Flour the 3/4 and roll and stretch it out to fit over the springform pan and go right up the sides. (So it will be a few inches longer, all around, than the bottom of the pan) Drape it over the pan.

Spread the cheese/pepper/tomato mixture over the bottom crust.

Roll/stretch the 1/4 left of dough to be very thin, and about the size of the pan. We didn’t get ours thin enough, so we had a too-thick doughy layer. It tasted good! But I think it would have been better a little thinner.

Spread a thin layer of sliced tomatoes over the top, and then sprinkle the fresh mozzarella over that.

Bake until the dough is puffed and golden, and the cheese is melted and starting to bubble and brown. About half an hour should do it, but keep an eye on it!