Malcolm wanted to go to the river. Isaac didn’t. It’s not the first time this has happened. After another epic struggle, we persuaded Isaac to walk down with us. As we walked, Malcolm declared that he was an outdoors swimming animal, and Isaac was an indoors curl-up-in-a-nest-of-fur-and-feathers animal. We laughed, cause it’s funny and it’s sort of true. But I felt uneasy. We try very hard not to label the boys a certain way. Not to say… Malcolm is a man who does this, and Isaac is a man who does that; or Malcolm’s good at this, and Isaac’s good at that. Because when somebody decides that you are a certain way, you can get stuck. I find it interesting, and a little frightening, how readily people take to a certain description of themselves. The boys like being defined in certain ways. We all do…everything’s such a confusing muddle, and it makes it easier if you have a semi-solid notion of yourself from which to make sense of it all. As an example…Malcolm is the boy who will try any food, Isaac is the boy who refuses to taste a thing. This is a thing that’s been decided, and Isaac is almost proud of it. But it’s just not true! In fact, I’d go even farther to say that the idea that children like bland, pale foods, and we should start out feeding them tasteless things, and trick them into eating anything else, is also, just not true. We fed tiny Malcolm oatmeal and yogurt and bananas. Then, one day, on a whim, we gave him orzo with pesto on it. Who turned the lights on? Flavor! Strong, sharp flavor! (Tiny little pasta that squishes through your fingers and drives the dog crazy when you scatter it ont the floor!) I think all children like strong flavors – Isaac likes olives and goat cheese – he always has. They both love capers, which they call flavor dynamites. We just have to give them a chance to try these things! Tapenade baby food, anyone? 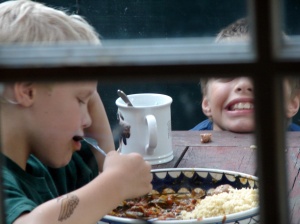 So when I made this Moroccan-spiced chickpea stew, Isaac refused to try it, because that’s what he does. Then I gave him a chickpea. He ate that, and helped himself to more. I gave him an olive. He ate that, and spooned a few more onto his plate. By the time the rest of us had left the table, I looked out the window and saw that he’d pulled the whole serving plate toward him, and was eating everything together, hungrily. So we’ll take Isaac swimming, and Malcolm will curl up on the couch with a good book.

The stew was really tasty, and it’s a good way to use up all your tomatoes, zucchini, and peppers, if you’re sick and tired of ratatouille. It’s not authentically Moroccan-spiced, of course. It’s just that it’s a pleasing mixture of savory spices and herbs, and “sweet” spices and herbs. And the bread! Well, I’d been reading fascinating accounts of Moroccan flatbread, that generally contain semolina, and are folded into all sorts of beautiful fashions. I decided to play around with these ideas, but in one big loaf. It turned out very nice! With a lovely texture and flavor – crumbly, chewy, and satisfying. If you don’t feel like doing all the crazy folding, you could just shape it into a nice round, and leave it at that. 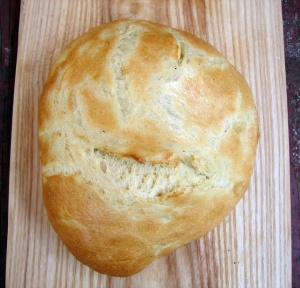 Here’s Peter Tosh’s beautiful I Am that I Am.

2 T olive oil
1 large shallot or medium-sized onion, diced
2 cloves garlic, minced
1 can chickpeas, rinsed and drained
1 zucchini, cut into fairly fine dice, or small wedges (1/4 inch by 1/2 inch)
1 large red pepper, roasted (or broiled) and roughly chopped (You do this by placing right on a gas burner or under a broiler till the skin is blackened, and then putting it right into a bowl with a plate on top, or a pot with a tight-fitting lid, or even a paper bag. After about ten minutes the skin peels right off, and you can slice the top off, remove the seeds, and chop. If you’re broiling, you can cut it into slices and de-seed it first)
2 tomatoes, roughly chopped
2 t capers
5 artichoke hearts, roughly chopped
1/2 cup olives, pitted and roughly chopped
1/2 cup white wine
1 T rosemary
1 t thyme
1 t oregano
1 t smoked paprika
1/2 t cumin
1/2 t turmeric
1/2 t cardamom
1/2 t coriander powder
1/4 t cinnamon, nutmeg, and allspice
juice of one lemon
2 T butter (If you’re not vegan!)
large handful fresh basil, chopped
salt and pepper

In a large frying pan over medium heat, warm the olive oil. Add the shallots and garlic, and cook till the garlic starts to brown and the shallots are translucent. Add the zucchini, stir and fry until it’s softened and starting to brown. Add the pepper, capers, artichoke hearts, olives, thyme, rosemary and oregano. Cook till everything starts to brown and get stuck to the bottom of the pan. Add the wine, and scrape all the nice caramelized stuff off the bottom of the pan and stir it into the sauce.

Cook till the wine is thickened and syrupy. Add the chickpeas, stir and cook till they’re coated and warmed through. Add the tomatoes and all the spices. If the tomatoes weren’t particularly juicy, add a little water. you want it to be saucy but not soupy. Cook at a gentle boil till the zucchini is just how you like it. I like it soft, but with a bit of bite.

Add the lemon, butter, salt, pepper and basil, and stir together.

In a small saucepan over medium heat, warm the olive oil. Add the shallot and garlic, and cook till they just start to brown. Add the couscous and stir and cook till it gets toasty. Add the water. Bring to a boil. Remove from heat, cover, and leave while you cook the rest of your meal. When you’re ready to eat, add salt, pepper and pine nuts, and fluff with a fork.

In a medium-sized bowl, combine 1 cup warm water, the sugar and the yeast. Whisk till well mixed, and leave for about an hour in a warm place.

In a large bowl combine the remaining flour, the semolina flour and the salt. Pour the bubbly yeast mixture in the middle. Add as much warm water as you need to bring it into a sticky dough. (You shouldn’t need more than half a cup). Knead for about 7 minutes. It should be sticky, but not get stuck to you – it’ll stick a little bit to your hands and the counter, but pull away again without leaving any behind. Add water or more flour to make it this consistency.

Shake a little semolina flour in a large bowl. Put your dough in, and turn it over till it’s coated with semolina flour. Leave for about two hours, then fold/punch it down.

Let it rise again for an hour or two, fold or punch down.

Scatter a little semolina flour on your counter. Roll, pull or otherwise stretch the dough to be about 1/2 inch thick and quite large. Spread or grate a little butter in the center and sprinkle with a little semolina flour. Fold the top down to the middle, and then the bottom up to cover that. Like an envelope. Turn the dough so you’re looking at it vertically, and squash it flat again. Put a little butter and semolina flour in the middle, and roll the dough up like a rug. Stand the spiral up like a tower, and then squash it down flat into a round shape.

Sprinkle a little semolina flour on a baking sheet, and put your round of dough on there. Let this sit for about 40 minutes. Towards the end of this time, preheat your oven to 500.

Every five minutes or so splash more water in and rub some on the dough.

It’s done when it’s golden brown on top and hollow-sounding when you tap it. 30-40 minutes should do it. Let it cool a spell and then slice it up.