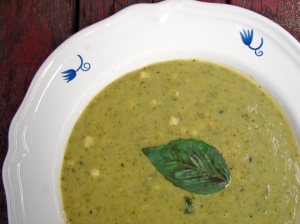 When last we’d left our intrepid explorers, Claire was yelling at Malcolm and feeling bad about it. CUT TO…several days later. Claire’s walking home from work. She’s tired, and if we’re being honest, she’s a little cranky and discouraged. Suddenly, through the shifting crowd of tourists, she sees two beaming faces bobbing towards her. It’s her boys! Isaac stops at the corner, and leans cooly against a lamppost; Malcolm charges across the street and nearly knocks her over with the force of his hug. Back in their paint-peeling, disordered, yet charming home, Claire makes a quick and delicious dinner. Then she and Malcolm set out to get a cup of coffee and a quart of milk for their breakfast. The air is cool and sweet, it’s a peach of an evening – a perfectly ripe, sweet, peach of an evening. So they take the long way, they walk down to the tow path. Malcolm says he wants to swim, but the air is like water, and it feels good when he flaps his arms like wings. Claire loves him so much she could cry, at that moment, but they walk along the towpath, both flapping their arms slowly like big strange birds. They meet friends who had a beagle that died the same week Steenbeck did. They have a new beagle puppy, who’s boundingly happy. They all seem happy, and they remark that Malcolm is almost as tall as Claire. “I know!” she replies, “and he’s only ten!” When Malcolm and Claire reach the main street, the shop is closed, so they keep walking. Somehow, Malcolm catches Claire’s hand…and holds it! Claire feels as though she’s caught a rare, sweet toad, that might jump through her fingers. This won’t happen much longer, she knows that. On the way home, they pass a boy they knew when he was Malcolm’s age. Now he’s a teenager, a big, lanky, laughing teenager, walking with his friends. Malcolm eyes them appraisingly. In the house, David and Isaac are playing a game with bug-inscribed tiles. Claire passes through the house to the backyard, because the air is so delicious. She listens to the katydids and the whirring evening insects. David joins her, and they hear a screech owl. He calls to it, and it calls back. They watch the day change into night, they feel the summer change into autumn. The boys come out, and Isaac curls up in Claire’s lap, his smooth cool/warm skin glowing milkily in the dusky light. They don’t want to go inside, they want to listen for the owl. It’s hard to make them go to bed, at this moment. CUT TO… 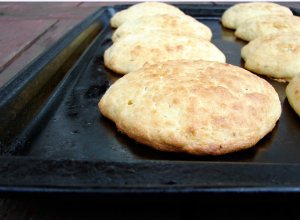 But wait a moment, you’re asking yourself! What was the quick and delicious dinner that Claire made? Well, I’ll tell you. It was a soup with zucchini, corn, scallions and lots of basil. Malcolm said it tasted like winter, and David said it tasted like something we’d eat in winter to remind ourselves of what summer tasted like. And we had biscuits made partly with semolina flour, with fresh sage, thyme, and oregano, and freshly ground black pepper in them. Isaac loved the biscuits. Everyone else liked everything together.

Here’s A Tribe Called Quest with Excursions. “I said, ‘Daddy, don’t you know that things go in cycles.'”

In a large soup pot over medium heat, warm the olive oil. Add the scallions, garlic, sesame seeds and nigella seeds. Stir and cook till the garlic starts to brown. Then add the potatoes, and cook them till they begin to brown and soften, stirring often. (about five minutes) Add the zucchini, and continue to cook till they begin to brown and soften. Maybe another five minutes. Add the wine and sugar, and scrape all the tasty caramelized bits from the bottom of the pot. Cook till the wine is reduced and syrupy, and add about 3 cups water (enough to cover everything by about 1/2 an inch.) Cook until the potatoes and zucchini are very soft. Add the basil, cilantro, butter, and lemon juice. Blend in small batches till quite smooth. (Careful, it’s hot!) Return it to the pot and add the corn. Cook till the corn is warmed through, season well with salt and pepper, and serve.

Combine the flours, salt, pepper, herbs and baking powder and mix well. Mix in the butter with your fingers till you have a coarse, crumb-like consistency. Add the milk and egg, and stir well till you have a thick lumpy batter. Lightly butter a large baking sheet, and drop the batter in eight mounds.

Bake for about 20 minutes, till they’re browned on top.