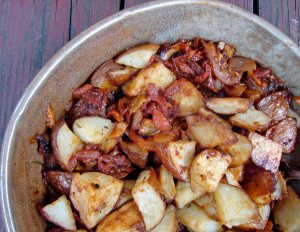 We went for a family bike ride this morning. David went on ahead with Malcolm, and I stayed behind with Isaac. He’s got short legs and a small bike, and he peddles four times for every one of mine. As exercise for me, this was a failure. The heart rate was not elevated, what with all the coasting and standing and waiting. As a ride to get somewhere, it was a failure. Isaac decided at one point that he had to stop to renew his energy. And that was as far as we got. As a chance to stand in a place that you love with somebody that you love, and notice everything going on around you, it was a huge success. The towpath is lush and green this time of year, and the trees meet overhead, sewn together with vines, so that you find yourself in a green tunnel, punctuated by spaces of shadow and spaces of bright light. As we stood surrounded by smells of lavender and lemon and wet earth, the clouds rolled by, making shadows that drifted through the tunnel like slow trains. The difference between light and dark evened as they passed overhead, and then jumped into sharp relief when they’d gone by. It was a giddy feeling of moving and standing still at the same time. Isaac said it must be the end of summer, because yellow leaves were slowly falling all around us. He asked, “Do you remember that time that you weren’t there…?” (I love the logic of this question) And he told the story of how they’d gone for a walk, and gotten lost, and climbed over a tree in the river. He said that day they’d eaten a breakfast of eggs, and then right away they ate dinner. A small moth landed on my knee, it felt like a blessing. Golden and dusky. It looked up at me with its sweet, speaking face, and slowly showed me how its wings opened in a strange and beautiful fashion. It held them open, it held them closed. Isaac wanted to catch him, but I wouldn’t let him. He said I liked the moth more than him, and he threw his bike on the ground and ran down the path, his bright yellow helmet bobbing up and down in the light and the shadows. I caught up to him and he said he was too tired. One tear rolled down each of his perfect cheeks. With a beautiful gesture, he reached up two fingers of one hand, and touched each tear with one finger. A tiger swallowtail flew circles around us, dappled like the day, and Isaac said that it flew the way we ride our bikes, flapping then floating, flapping then floating. Malcolm and David, who had made it to the next town and back again, overtook us. David went home at Isaac’s slow pace, and I got to ride home with Malcolm, who chattered merry nonsense, and darted through waves of sunlight like a little minnow, resplendent in bright red and bright green, on his bright Tintin blue bike.

It’s August! Summer is ripe. I can’t tell you how excited I am about the vegetables this time of year. Tomatoes, shallots, potatoes, garlic. I love them all! I love them together! I decided to roast them – the potatoes by themselves till crispy, and the tomatoes, shallots, and garlic together till meltingly soft and starting to caramelize – and then stir them together at the last minute with lots of black pepper. I love how simple this is, and how it all works together.

We have a guest DJ today. My friend SpottedRichard put together an excellent playlist of Latin music, and I’m going to link to that, because it’s bright and sunny, and helping to wake me up. So here it is!

salt and plenty of pepper

Preheat the oven to 425. Toss the potatoes with enough olive oil to coat (a few tablespoons) and the rosemary. Spread them in a single layer on a baking sheet, and put them in the oven.

Cut the top off the tomatoes, and gently squeeze out some of the seeds. Cut them into thick wedges. Put them in a roasting pan, and stir in the olive oil, balsamic, shallot, and garlic. Tuck the rosemary in amongst them, and put the pan in the oven.

Cook, stirring occasionally, until the potatoes are golden and crispy. You’ll need to turn them occasionally, using a metal spatula so that you can scrape them cleanly off the tray.

As the tomatoes start to melt and caramelize, the edges of the pan will get dark and sticky. Pour the port or wine over this and scrape it off and stir it in to the tomatoes. You might need to do this more than once.

Remove the rosemary stem from the tomatoes, and spread the tomatoes, garlic and shallots in a wide shallow bowl. Put the potatoes on top, and give a quick stir so they’re just coated with the tomatoes (you don’t want them to get mushy before you get to the table, so combine them at the last minute. They can sit on their trays quite happily till you’re ready to eat.)

Season well with salt and lots of pepper, and serve.