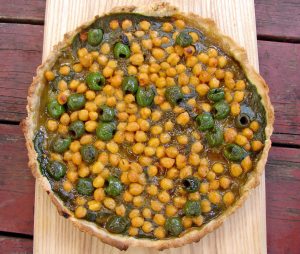 Well, I was a little cranky yesterday! I had a small tantrum because we couldn’t find some place we used to go bird watching. I yelled at the boys everywhere we went. I yelled at them for making me yell at them. I yelled at them as we bought them giant cookies. And they weren’t being bad! They were happy, and noisy, and getting along with each other. But Isaac has this squeal – it’s very high-pitched, and it goes right through you. He resorts to it whether he’s very happy, indignant, or actually hurt. It signals panic either way. And Malcolm was being sweet and good, but why can’t he just walk? Why must he climb walls, jump off benches, press Isaac’s shriek & giggle buttons? Why! By evening-time I had to sit in the back yard and watch squirrels to try to rid myself of my cranky-induced headache. But I wouldn’t tell anybody about that! I’d talk about the good things – the Savory Spice shop we went to, which was completely wonderful! How sweet it was to see the boys excited about smelling all the spices! The beautiful place we found for a walk! The tart that I made for dinner, which I had literally dreamed of, which was a little odd, and which I might not have made if it wasn’t my birthday! Everybody being together on a beautiful day! How I got a beautiful new golden-amber bakelite watch and some perfectly claire-y pens and a blank notebook, which is the most inspiring thing ever! (From Modern Love)

I started watching a Masterpiece Theater version of The Portrait of Dorian Gray the other day, while I was exercising. (I jump around the living room holding two cans of beans while I catch up with The Daily Show on the computer. Isaac thinks this is hilarious! “You’re holding two cans of beans!!”) I love late Victorian novels – they’re so well-crafted and beautifully novelly. It was pretty well-done. It had Prince Caspian in it, and Mr. Darcy! And some guy named Ben who was familiar. It was a little dark and gloomy for early-morning-exercise-viewing. It had a lot of shocking Victorian nudity. (Masterpiece Theater wasn’t like that when I was a lass! When I was a lass, characters from televised versions of literary classics had the decency to keep their oddly-eighties-looking costumes on, thank you very much!!) When I thought about how cranky I was yesterday, but how I wouldn’t write about that part of the day, I had an idea for a modern version of Dorian Gray. What if there was somebody who had one of those mommy-blogs, or an advice column about parenting. What if they talked about their own lives in glowing, unrealistic terms. And then…all of the bad stuff they don’t write about manifests itself doubly in their real lives, until they all descend into a spiralling vortex of depravity and despair!! Bom bom bommmmmmmmmm.

So! This tart! I was quite excited about it. I had thought of having a tart with a base of chard and goat cheese and fresh basil, all mixed together till smooth and bright green. This would be poured into a crust which contained some zesty lemon zest and white pepper. And it would all be topped with chickpeas and olives, which would become, as it were, roasted, as they cooked. And poured over the whole thing would be a provocative glaze of quince jelly, lemon & lime zest, and lemon and lime juice, for a sweet/tart surprise. It was surprising, and I thought it was quite good – very summery. I mixed some sumac and smoked paprika in with the chickpeas, because I had just bought them at the savory spice store, and I was little-kid-excited about it. Isaac said he tasted three layers of flavor, which I thought was very bright and perceptive for a six-year-old. 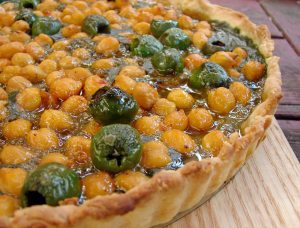 I also roasted some potatoes, and we had them with lots of pepper and my new alderwood-smoked sea salt. (SMOKED SEA SALT!!) it was delicious!!

Here’s Bob Marley singing Corner Stone (a rare acoustic version!) I’ve been listening to this a lot lately, driving around, getting lost looking for bird watching places. I love it so much!

Combine the flour, salt, zest, pepper in a bowl. Make a well, grate in the butter. Mix it to be crumb-like. Add enough ice water to pull it into a workable dough. Knead it for about 1/2 minute, and then wrap it and put it in the fridge till you’re ready to use it.

Boil a big pot of salted water. Drop the chard in and cook for about 5 minutes, till it’s wilted but still bright. Drain, cool, and squeeze out all of the excess moisture. Chop.

In a blender, combine the goat cheese, eggs, basil, salt, pepper, garlic and chard. Mix till it’s nice and smooth.

Combine everything in a bowl till the chickpeas are well-coated.

If you don’t have quince jelly, anything tart/sweet would work. Marmalade might be nice! Or apricot jam!

Roll the dough to fit your butter & floured tart pan. Press it into the pan, and put it in the oven while it preheats. Just for 5 or 10 minutes, till it looses that shiny look, and you can be sure it will stay up on the sides. (If it doesn’t you can press it back up carefully, while it’s cooking. Don’t get burnt!)

Take the crust out of the oven, and pour the chard/basil mixture in, spreading it into a neat even layer.

Using a spoon, spread the chickpeas evenly on top, leaving excess liquid in the bowl

Spread 1 cup of castelvetrano olives (pitted and drained) neatly amongst the chickpeas.

Pour the glaze over everything, trying to spread it as evenly as possible.

Let the tart sit for about ten minutes before de-panning, to allow the glaze to set a little bit.