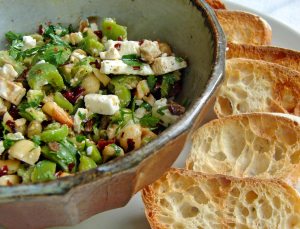 Malcolm has standardized testing all week. These last few weeks he’s been working on essay composition. I decided to write this using the methods he’s been taught. Here we go…
“My goodness, look at those!” She cried, jumping back in surprise. [Narrative grabber] “Castelvetrano olives! I never thought I’d find them in a market so close to my home.” She bought as many as she could afford, and then her eye was caught by a creamy white cheese. “What’s that?” she queried. [Try not to use the words “said” or “asked”]
“Well,” responded the vendor, a short, pleasant woman with dark brown hair, [describe all the characters in detail], “It’s French feta cheese. Would you like a taste?”
It was the most delicious thing she’d ever eaten. [hyperbole] Creamy and juicy, with a nice salty edge, but much milder than Greek feta. She counted out her coins and bought a small slice.

There are several reasons I like castelvetrano olives. One is that they’re very pretty. They’re as green as serpents, as bright as spring grass, and as shiny as emeralds. [similes!] They taste so good, too. They’re have a very vegetable-y taste, they’re fresh and buttery and mildly salty. [List reasons and support with details and examples] I thought the feta would go very well with them, and as I drove home with little packets of each on the seat next to me, my mind whirred with the possibilities. I wanted to make a tapenade, but not puréed – I wanted to retain the taste and texture and pretty colors of the olives. I thought of all the things I could add. Tart cherries would add a touch of sweetness, chopped hazelnuts would add a bit of crunch, and tarragon and chervil would lend their intriguing lemon/anise zing. Plus they’re half of that band “Les fines herbes.” They’re the bassist and the drummer, I think.

To conclude, I love castelvetrano olives, and I was surprised to find them at a market near my home. I made them into a chunky sort of tapenade that had a lovely mix of flavors and textures. It was delicious on small toasted pieces of baguette. We ate every little bit, and I was tempted to lick the bowl! Who knows what we’ll have for dinner tonight? [The conclusion should restate what’s already been said, in a slightly different way, but try to leave the reader wanting more with a takeaway ending.]

Here’s Chunky but Funky by Heavy D, to listen to while you chop olives for your chunky tapenade.

Note: You could make this with kalamata olives and greek feta. It would just be saltier and more assertive. Still plenty tasty, though!

Basically, you just chop everything and mix it together!! Serve with chips, or toasts, or fresh bread, or any other way you like

7 thoughts on “Deconstructed tapenade (With castelvetrano olives and french feta)”