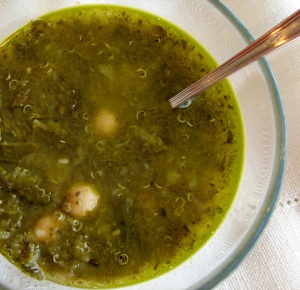 Quinoa? Aw, man, I was totally into quinoa back when nobody knew about it. Back before it became all popular. I used to buy it at this small store that was, like, all hardcore vegetarian stuff, and, like imports. Quinoa was so cool – it was my favorite, and it totally spoke to me. It was my perfect food, man. And then it started getting bigger, and playing the big stadiums, like shoprite, or, you know, pathmark, and suddenly everybody’s eating quinoa. And it’s in cookies, and, pancakes, and bread, and in mother-flippin statues of Mount Rushmore probably. Totally sold out. It’s so sad when that happens to a grain-like crop grown primarily for its edible seeds. So sad.

That’s right, I ate quinoa in 1993! That’s got to make me one of the first wave of quinoaers, right? Old school! Except for maybe the Incas. They might have come first. When I first met David (in 1993) he made a quinoa-barley soup that his co-worker had recommended. And it was really good! I have to admit that I don’t cook with it as often as I should, and I’m ashamed to admit that it might be because it’s so popular now! It’s so earnestly vegetarian, which is a quality I admire in a food, but sometimes it makes me take a step back from it for a while. Silly, I know!!

If you’re looking for a way to introduce quinoa to somebody who hasn’t tried it, this might be it, because the quinoa is so much a harmonious part of everything going on around it. Malcolm asked what the little floating curls were, and I said, “sea monkeys!” Fortunately he’s too young to know what those are, so I revised my answer to “the ultimate Incan super-food, that made them into superheroes!” He liked the soup a lot, anyway.

I think this soup turned out really well! I’m quite proud of it! It’s got a really pleasing flavor and texture. Very savory, soft, but substantial, and comforting. I grated the zucchini, which, once cooked, gave it a perfect sort of texture. And I puréed half the spinach and chopped the other. I used the broth left over from cooking french lentils, but I think you could make a simple vegetable broth and it would be fine. It’s as close to chicken soup as I’ve come since I stopped eating chicken soup. And probably better for you! It’s simply seasoned with fresh thyme, nutmeg and cinnamon. I wasn’t sure this combination would work, but I went ahead with it on a whim, and it’s really good!

Here’s Carnaval ayacuchano from an album called Peru: Kingdom of the Sun, the Incan Heritage. I love this song!

2 T olive oil
1 shallot – finely minced
1 plump clove or garlic – finely minced or crushed
1 t fresh thyme
hefty pinch of nutmeg (maybe 1/8 teaspoon?)
hefty pinch of cinnamon (maybe 1/4 teaspoon?) For both, start small, because you can always add more later
1/2 t red pepper flakes (or to taste)
1/3 cup white wine
1/2 cup quinoa
1 zucchini, grated
1 can chickpeas, rinsed and drained
About 6 oz spinach – puree half with a drop of broth or water (not too smooth, though, you want it to have some texture) and finely chop the other.
About 1 quart vegetable broth (use the broth leftover from cooking french lentils, or make your own by warming some olive oil, adding roughly chopped shallots, garlic, carrots, a handful of french lentils, a dash of tamari, some rosemary, sage, thyme, a mushroom or two. When it’s sizzling, add 5 or 6 cups water, bring to a boil and simmer for at least half an hour)
dash of balsamic
salt and freshly ground pepper