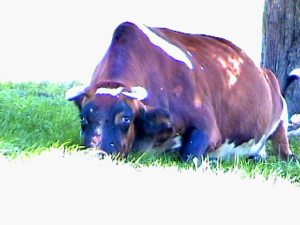 No, I’m not going to give you a recipe for a vegetarian version of pink slime! Pink slime has been in the news so much lately, and I find reading about it, and reading the conversations that follow, very frustrating. So I’m going to take a moment to try to organize my thoughts, which are after the jump. Please feel free to ignore them! I realize that I sound preachy, but I sincerely don’t mean it that way. Sometimes things seem so clear to me, when looked at a certain way. I’m just trying to explain the way the world makes sense to me.

I don’t talk much about being a vegetarian. I don’t like to proselytize, for one thing. And for another, as I’ve mentioned before, I’ve been a vegetarian for so long that I don’t really think about it any more. I ate meat for the last time when I was twelve, which was the age at which I had the gumption to do something that had made sense to me for a long time. I liked Wilbur and Bambi, I didn’t want to see them die. We had dogs and cats, and even hamsters and mice. I saw that they had personalities, that they felt fear, that they showed affection. A pet mouse died in my hands when I was very young, and in that moment I understood that we can never understand exactly what life is, and that it is something we shouldn’t take upon ourselves to take away from another creature. It made sense to me on every level. Nothing tasted so good to me that it justified taking a life. And the more I’ve learned about the process of raising and slaughtering animals, about the toll that it takes on the earth and on our health, the more justified I feel in my decision.

Yes, we’re omnivores, yes, we can eat meat. But we’re also (hopefully) rational, compassionate creatures. We know that we don’t need to eat meat. Yes, nature is “red in tooth and claw,” but we have removed ourselves so far from nature, that this no longer functions as a justification for the consumption of meat. The very outrage over the pink slime debacle proves this point. Pink slime is disgusting, but it’s just part of a process that has always been, and can only be disgusting. What surprises me is how surprised people are by the information. And the reactions seem so far off the mark to me. Removing pink slime from your ground beef isn’t going to make everything else in it – all the blood and body parts and hormones, any better for you. Buying non-factory-farmed meat, or even killing the animal yourself, isn’t going to make the decaying corpse more palatable. The answer is so obvious…stop eating meat!

It’s not hard. You won’t feel miserable and deprived. You won’t be fat or weak. You won’t have to spend hours making elaborate meals. You can be a joyful vegetarian! There is so much gloriously delicious food in the world. Most of the time meat tastes good because of the way it’s flavored and the way it’s cooked, and all of that is still available to you. So many herbs and spices and sauces and seasonings. The possibilities are endless. Every tasty meat dish you’ve ever eaten can be approximated with beans and vegetables. (Challenge me – I’ll come up with a version for you!) You can make beautiful, delicious, healthy (if you want them to be) meals, and you can know exactly what is in them. It can be a very good life!