Sofrito…it’s fun to say and delicious to eat. 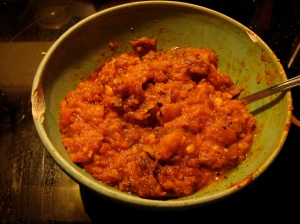 It’s also one of those foods that turns up all over the world in different guises. In Spain it’s a slow-cooked, intensely flavored tomato paste. Where different versions of sofrito show up – in the Carribean, latin America, the mediterranean – you’ll find different ingredients added or taken away. You’ll find green peppers, pork, cilantro, olives, capers, chilies, different seasonings. A sofrito is usually a base for another dish. You can add it to a soup or stew at the end to deepen the flavor, toss it with pasta, use it as a condiment. And it is the main ingredient of the empanada gallega, which is the mother of all empanadas. 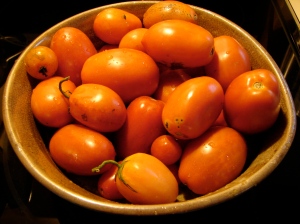 I picked these paste tomatoes from our local CSA, but you can just as easily (well, more easily, really!) make them from a can of tomatoes. But use a can of good tomatoes – fire roasted is nice!

This is my version of a Spanish sofrito. I keep the seasonings simple (rosemary and beautiful smoked spanish paprika) because the sofrito will probably find itself in another dish, mingling with other flavors. I’m not sure this is authentic, but it is delicious!

Recipe after the jump.

The amount of ingredients will vary according to the amount of tomatoes you have, but I’m going to give you amounts for two 14 ounce cans of tomatoes, or the equivalent amount of chopped fresh tomatoes.

If you’re starting with fresh tomatoes (you can really use any variety), cut a small slice off their stem end, and make a small X in the other end.

Drop them into a large pot of boiling water and leave them for about a minute, until the skins start to pucker. Lift them out with a slotted spoon, and let them cool for a minute, so that you can handle them without burning your fingers. When they’re cool enough, peel off their skins and roughly chop them. Paste tomatoes don’t have a lot of seeds, but if your tomato is quite seedy, you can squeeze out some of the seeds before you chop them.

This brings you even with anybody in possession of two cans of tomatoes, so we’ll begin the recipe here…

2. …tomatoes. (If you leave the paprkika in hot oil too long it will burn and get bitter). Let the tomatoes come almost to a boil, and then reduce heat and simmer.

3. Let them simmer on medium low heat for a long time. FIrst they’ll get very juicy, then they’ll dry out, then they’ll become more and more of a paste and less and less of a sauce. And at some point, they’ll separate from the oil, which will be a beautiful reddish saffron color. That’s how you know they’re done. It can take up to an hour. You don’t have to stir them constantly, but it’s a good idea from time to time, because you don’t want them sticking and burning. If you have to add a drop of water now and again, toward the end, that’s fine.

4. Season with salt and pepper, and a dollop of butter and a dash of balsamic, and use as you like!