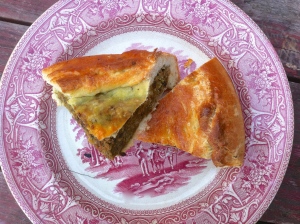 Well, time is folding in on itself again. The boys had two days off school, and we went for a long walk to my favorite field, and I realized that this was the same weekend that we went last year, except last time they were dressed as an owl and a ghost bat. We’re all a little older and more serious now, it seems. The boys were dressed in normal civilian attire and I wouldn’t let Clio off-leash because now I know how it feels to lose her for a while. I just woke up and noticed that all the trees are nearly bare, and last time I looked summer was just ending. But there we were walking to my favorite field again, we had the sun on our faces and the wind blowing the cobwebs from our minds. And Malcolm told me the story of a remarkable new superhero he invented. His name is an inversion of Dr. Doom’s–that’s how it all started. So he’s Mr. Mood. And his power is that he can control his moods, and when he does, it gives him super powers. So when he’s happy (and he can make himself happy) he can fly and shoot lightening. And when he’s sad he’s heavy, and he sinks down, down into the water, where he can breathe easily. And when he’s scared, he turns into something scary–whatever his adversary is afraid of. When he’s angry he turns into an adult, and he can drive, and he can shoot fire. Yeah. And here’s his backstory. He’s thirteen years old (one year older than Malcolm now.) Where does he live? Not in New York, because too many super heroes live in New York. He lives in Trenton, because his last name is Trent, and he thought he might find his parents there. He lives in an abandoned building. I love Mr. Mood! I love asking Malcolm questions about his backstory and hearing his thoughtful unexpected answers. If there’s one parenting skill I’ve always lacked (of course there are a million parenting skills I lack, but it’s no good dwelling on this too much, listing them and trying to choose the biggest and best), so if there’s one parenting skill I lack, it’s the ability to control my mood; to be fun when I’m feeling down, to be patient when I’m angry, to not curse when I hurt myself. Malcolm’s always been a little short-tempered himself, but I’ve watched with great joy this year as he’s worked very hard to change that. I’ve watched him get so angry he obviously wanted to punch something, and then stop, and turn it off, and sit down and do his homework. I’m going to work on it, too, at my ripe old age. I’m going to work on controlling my mood, too, and I’m looking forward to the super powers that ensue. 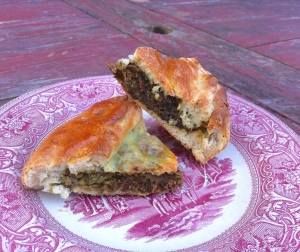 It’s funny how all the vegetables seem to be a little more bitter in the fall. A little more strongly-flavored. Greens, lettuces, turnips. These turnips are just about the last of the produce we had from our CSA for the season. They’re pretty, but they have an edge to them. So I roasted them with a little brown sugar, to mellow them out somewhat. And then I combined them with spinach, walnuts, thyme and sharp cheddar and put them in a crispy soft brioche-style crust. And that’s that!

Combine the yeast, sugar and warm water in a large bowl and set aside in a warm place to get frothy. Over low heat, melt the butter with the milk until just melted. Remove from heat. Stir the milk, butter and egg into the yeast mixture and mix well. Add the flour and salt and stir till combined. You should have a soft, workable dough, but add more flour or warm water if necessary to make a dough you can knead. Knead for about seven minutes and set aside in an oiled bowl covered with a damp cloth. Leave in a warm place for about 1 1/2 to 2 hours, till it seems doubled in bulk. Fold it down, and leave for another 45 minutes.

Preheat the oven to 425. Peel and grate the turnips (I use the food processor to grate them). You’ll probably have an unruly pile of turnip gratings at this point, but it will cook down. Mix the turnips with the olive oil and sugar…your hands work best at this point. Spread in an even layer on a baking sheet. Roast until the turnips are quite dry and golden brown. Keep stirring the turnips and scraping them from the bottom of the pan so that everything browns evenly.

Combine the cheese, walnuts, bread, spinach and thyme in a food processor and process until coarsely ground. Tip into a bowl. Stir in the turnips and all of the egg but about 1 T. Season well with salt and pepper.

Preheat the oven to 400. Lightly butter a cake pan. Divide the dough into portions, one about 2/3 the other 1/3. Press the larger part into the pan and up the sides. You should have quite a thin crust, but be sure that you don’t have any holes.

Fill the center with the filling. Stretch the 1/3 chunk of dough into a circle, and place over the filling. Seal the edges and fold them over towards the middle. Brush everything with the remainder of the beaten egg.

Bake for 30 – 35 minutes, until puffed and golden and firm to the touch. Let cool and set for a few minutes before cutting into it.