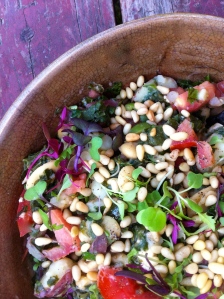 It’s movie week here at The Ordinary! I seem to be talking about a different film every day, and today will be no different. Today’s installment features Le Corbeau made by Henri-Georges Clouzot in 1943. The film is about a small town plagued by anonymous poison pen letters, which threaten to tear the very fabric of the town to pieces. Everybody feels guilty about something, everybody tries to blame somebody else, everybody becomes plagued with fear and suspicion. It’s a fine film, in many ways, beautifully shot in black blacks and white whites. It’s suspenseful and mysterious, almost Hitchcockian. It’s still oddly relevant considering that the internets are full of anonymous trolls. But the thing that really stuck with me, strangely, is the way the setting is described in the very beginning. A small town, “ici ou ailleurs.” Ici ou ailleurs! Here or elsewhere! This phrase has been stuck in my head for days. I love the sound of it and the meaning of it. It makes any story into a fable or a myth, showing how our fears and hopes and passions are the same no matter where or when we live. It makes the story Ordinary by showing that it could happen to anyone, anywhere. Ici ou ailleurs. Of course Jean-luc Godard beat me to it, he made a film called Ici et Ailleurs. He made it with Anne-Marie Mieville, and it’s a reworking of footage they shot for Jusqu’à la victoire, a 1970 pro-Palestinian film. I haven’t seen it yet, but the trailer juxtaposes “simple images” of French children watching television with shots of Palestinians, and a woman’s voice tells us, “We should learn how to see here in order to be able to hear elsewhere. Learn how to hear yourself speaking in order to see what the others are doing. The Others, the elsewhere of our here.” Godard! Ici ou ailleur. 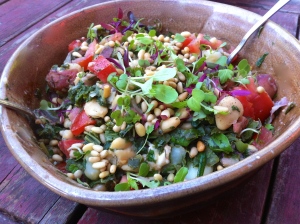 It’s so much fun to make dinner when you just return from a CSA with your arms full of fresh vegetables! Yesterday I made them into this sort of warm salad with potatoes and butter beans for substance. The potatoes, beans, and broccoli rabe were warm, the tomatoes, mozzarella and herbs were cool, and they all melted together when combined. I picked some bronze fennel, which was new to me and very lovely, and I minced that and added it for a nice mellow anise-y flavor. We ate it with a loaf of crusty bread, and Malcolm made it into a big sandwich.

Boil the potatoes in a pot of water until soft but not falling apart. Steam the rabe over the boiling potatoes until wilted but still bright…five or ten minutes. Rinse under cool water, chop quite finely, set aside. Drain the potatoes, let cool till you can handle them, then chop into big chunks (if they’re small enough you can leave them whole).

In a large skillet over medium heat, warm a little olive oil, add the garlic and the jalapeño, stir and fry until the garlic starts to brown. Add the cooked potatoes and the butter beans, and stir and fry until the potatoes start to brown and stick to the pan. Add the cooked chopped greens and the spinach and a little water so that you can scrape the potatoes from the bottom of the pan. Stir and cook until the spinach is nicely wilted.

Tip the warm potatoes beans and greens into the tomato mixture, stir to combine. Top with pine nuts and spicy shoots, if you have them.