Roasted mushroom and olive pizza with a mashed potato crust

Sleepy John Estes had a “…tendency to withdraw from his surroundings into drowsiness whenever life was too cruel or too boring to warrant full attention,” according to blues historian Bob Koester. In a strange way, when I read this I thought, “I know what that feels like!” I’ve always gotten very tired when I feel nervous or confused, and I sometimes I think I feel tired all the time because I don’t sleep very well…I’m half-awake all night and half-asleep all day. I wonder if Sleepy John Estes felt that way, too, because he sings, “You know I worried last night and all night before/ You know by that I won’t be worried no more/ I was worried for you, I was worried for me/ You know by that I’m gon’ let it be.” It’s a beautiful song with a kazoo, and I love to hear him say that he’s not going to worry any more, but we all know that’s easier said than done. There’s something about Sleepy John Estes songs that makes them easy to relate to, that makes them very powerful though they’re often quite simple. He talks about his life, he talks about the people he meets, and the events that effect him from day to day, and though the subject is quotidian, his language is resonant and the music is perfect. He’s another patron saint of The Ordinary. 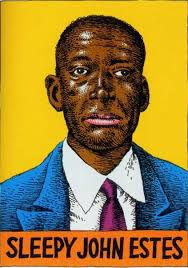 He talks about waiting for the mailman, hoping for some good news. “Now I been waiting on the mailman : he usually come around about eleven o’clock/ Now I guess he must have had car trouble : or either the road must be blocked/ Mailman : please don’t you lose your head/ You know I’m looking for a letter from my babe : some of my people might be dead.” He tells the story of a fire in his town,”When you see the chief : boys please clear the street/ Because you know he’s going down : save little Martha Hardin’s house for me/ She’s a hard‑working woman : you know her salary is very small/ Then when she pay up her house rent : that don’t leave anything for insurance at all./ Now I wrote little Martha a letter : five days it returned back to me/ You know little Martha Hardin’s house done burnt down : she done moved on Bathurst Street.” It’s almost as though he’s reporting on the local news, but though the details are small and specific, the words and imagery are so urgent the tale becomes more universal. In Floating Bridge, Estes tells of a time he nearly drowned during a flood. It feels dreamlike and mythological, he talks of the flood and of drowning and rebirth. “Now I never will forget that floating bridge/ Tell me five minutes time under the water I was hid/ When I was going down I thowed up my hands/ Now they carried me in the house and they laid me ‘cross the bank/ “Bout a gallon-and-half muddy water I had drank/ Now they dried me off and they laid me in the bed/ Couldn’t hear nothin’ but muddy water runnnin’ through my head/ Now, people standin’ on the bridge, screamin’ and cry in’ People on the bridge was screamin’ and cry in'” It’s so beautiful and wild and surreally real. One of my favorite songs is Clean Up at Home. It’s a rare sentiment in any kind of music. It really is about cleaning up your home, but it’s also about taking care of yourself and what you have and who you have, it’s about tending your own garden.

I went to the beer tavern, tryin’ to make me a dime
Said, “Go ‘way, boy, clean up and git on some time.”
CHORUS

Yeah. I was worried last night and the night before, but I ain’t gonna be worried no more.

THE PIZZA:
I was feeling sort of wobbly all week last week, so I kept making bread, comforting foods. Here’s one! It’s a sort of pizza, but it has a mashed potato crust. This makes the crust quite soft, it’s more of a knife-and-fork pizza. The crust is comforting, but the topping is quite flavorful–roasted mushrooms, olives, and a mixture of sharp cheddar, mozzarella and smoked gouda. A nice meal for a reluctant spring.

Combine the yeast, sugar and 1/2 cup of warm water in a large bowl and leave in a warm place for about fifteen minutes. Meanwhile…

Peel the potatoes and boil them in a big pot of salted water until they’re soft but not completely falling apart. Mash them with the milk and butter and let them cool slightly.

Add the flour, salt and pepper to the yeast and sugar mixture, and then stir in the potatoes. You should have quite a soft dough. Stir it vigorously for a minute or two, and then return it to the warm place for a couple of hours.

Roast the mushrooms like this, with shallots, garlic, sage, rosemary and thyme.

Preheat the oven to 450. Spread a thin layer of olive oil on a pizza pan or a large flat baking sheet. Spread the dough evenly across the sheet in a thin layer, building up the edges to form a “crust.”

Sprinkle the mushrooms over the crust, then the cheese over the mushrooms. Top with the olives and pine nuts. Season well with salt and pepper.

Bake for about 20 minutes until the cheese is bubbling and starting to brown.