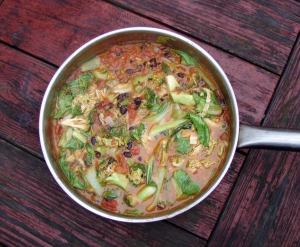 I’ve been thinking about my post yesterday, in which I suggested that everybody can be creative all the time no matter what their job or financial status. I may have seemed to imply that, according to my slightly skewed definition of “a successful life,” a person would need to be some kind of artist to be happy. (And, to be honest, this is something I would wish for my boys, though I would stretch the definition of artist to encompass doodling, making nice meals, and humming nonsense as you walk to school.) “But wait a minute,” I could imagine somebody replying. “What if I can’t create anything? What if I just don’t want to?” Which is, of course, a reasonable response. And I’ve got another option for you. Because I was thinking that I also very much admire admirers. The ability to appreciate something is just as valuable as the ability to create something. In fact, I believe it is creative. It’s an important part of the creative process to be moved by something, to see its beauty, to be excited by it, to be a fan. In most aspects of my life I happily fall into this category. I like writing, but it’s frustrating, too, and not comparable to the strong pure pleasure of reading a well-written book. I’d like to make a film, but it’s so expensive and complicated. Watching good films, however, brings the pleasure of immersing yourself in a world of somebody else’s genius. I was talking to my mom the other day, who is a professor of music, and she said, (and I paraphrase) that she’d rather have the ability to appreciate music than all of the professional accolades in the world. I also admire a certain curatorial spirit. Some people have the ability not only to appreciate art, but to bring people together to share and celebrate, which seems so full of warmth and generosity to me. Nothing is created in a vacuum – if you’re singing along to a song you love as you drive to work, you’re an important part of the process of making that song, and your life is richer for it. So cheers to all of my fellow readers and listeners and watchers, as well as to the curators and patrons!

And I was thinking that cooking (and eating) is a perfect microcosm of the macrocosm of the whole creative process, encapsulated in each meal. It’s a distillation of the pleasure of creating and sharing. And it’s something we have to do every day! You don’t have to be a chef to take pleasure in cooking. And, as much fun as a meal is to cook, it would be nothing without somebody to taste it. I made this particular dish, of greens and beans with a spicy sauce, because a) we have tons of tomatoes, bok choy, broccoli, and napa cabbage from the CSA. And b) we all have colds, and wanted something comforting but spicy, and c) I opened a can of coconut milk yesterday to make my banana bread and I wanted to use it up. The sauce is flavored with cumin and ginger. It’s spiced with red pepper flakes. The black beans add earthiness and substantiality. The greens are lightly simmered in the sauce, so that they still retain their distinctive flavor and crunch.

Here’s Bob Dylan’s Song to Woody. I love the idea of Bob Dylan, idolized by so many, being such a fan, himself. Plus it’s really pretty!

Bring a pot of water to a boil. Meanwhile, chop the very tops off the tomatoes, gently squeeze out the seeds, and cut a small X in the bottom of each tomato. Drop them into boiling water for about a minute, till their skins start to pucker. Fish them out with a slotted spoon. Let drain and cool for a minute. Then slip their skins off and chop them rather finely.

Warm the olive oil in a large frying pan over medium heat. Add the shallot, sesame seeds and red pepper flakes and cook for a few minutes till the shallot starts to brown. Add the garlic. After about a minute, add the tomatoes. Stir to coat with the oil, and cook for ten or fifteen minutes, till the tomatoes are quite soft and saucy. Break them apart a bit with your spoon as you cook. Add the black beans, the cumin and the ginger. Stir and cook for a minute or two, then add the tamari and the coconut milk. Add one cup of water, stir, reduce the heat to low, and simmer for five or ten minutes, till everything is hot through. If it gets too thick, add a bit more water. Add all of the green vegetables, stir to coat. Cover and cook for about five minutes, till they’re wilted, but still bright and slightly crispy.

Remove from the heat, season with salt and plenty of pepper, stir in the basil, and serve over basmati rice.